BEGINNING, 1968 Gerard Dillon (1916-1971)
Signature: signed lower left; inscribed on reverse Medium: oil on canvas Dimensions: 66 by 76cm., 26 by 30in. Provenance: De Vere's, Dublin, November 1995; Peppercanister Gallery, Dublin; Whence purchased by the present owners Exhibited: ‘Gerard Dillon’, Dawson Gallery, Dublin, 12 June - 2 July 1968, catalogue no. 17; ‘Summer Exhibition’, Peppercanister Gallery, Dublin, 11 June - 4 July 2003, catalogue no. 11 (illustrated on front of catalogue) In 1962 Dillon began a series of paintings incorporating the figure of the masked pierrot, which he would work on until his death (for a fuller discussion of the series see James White, Gerard Dillon:... : An Illustrated Biography, Wolfhound Press, Dublin, 1994, pages 90-94). The series began with And the Time Passes (1962), which depicted two clowns hand-in-hand and was a direct response to the death of his brother, Joe. Over the next three years Dillon’s other two brothers died of the same heart defect that had taken Joe, and Dillon began meditating on his own mortality. The initial pierrot pictures thus took on an air of deep melancholia, culminating in The Brothers (1967), where the pierrot mourns three skeletons buried one on top of the other in the earth. However, the bright colours of these pierrot works were cheerfully insistent and led Dillon along a more surrealist or fantastical vein. By 1967 he was referring to the series as “pierrots in poetic fantasies” (White, op. cit., page 92). After surviving a cardiac arrest in the late summer of 1967, he returned to the pierrot theme with great enthusiasm and by early 1968 was experimenting with cut-out shapes in the sky of these compositions. He described the process to his nephew in a letter: “It’s great fun trying to get the optical illusion of now one minute the shape is receding and now coming forward. It’s the difficulty that makes it worth while attempting – the result is decorative primarily, I suppose with an undercurrent for surrealism” (quoted in White, op. cit., page 93). Thus in Cut out, Drop out (1968, AIB collection), the pierrot contemplates a green and blue sky with ghostly clown-shaped clouds, whereas in Once Upon A Wavelength (1968), the clouds are shaped like women, swirling over the head of a female nude who looks towards a waving pierrot in the distance. In Beginnings the clouds are more amorphously shaped, suggestive of archaeological finds: flints, shells and bone shards. The pierrot stands in an attitude of contemplation, aware perhaps of his imminent return to the earth, wherein lies the clues to the beginning of time. The work almost certainly relates to another painting, Red Sky Wonder, exhibited at the Living Art Exhibition of 1968 (whereabouts unknown). Certainly the pierrot in Beginnings expresses with his clasped hands and balletic poise a sense of wonder and inspiration, that is in itself a marvel in a mature artist in his final years more 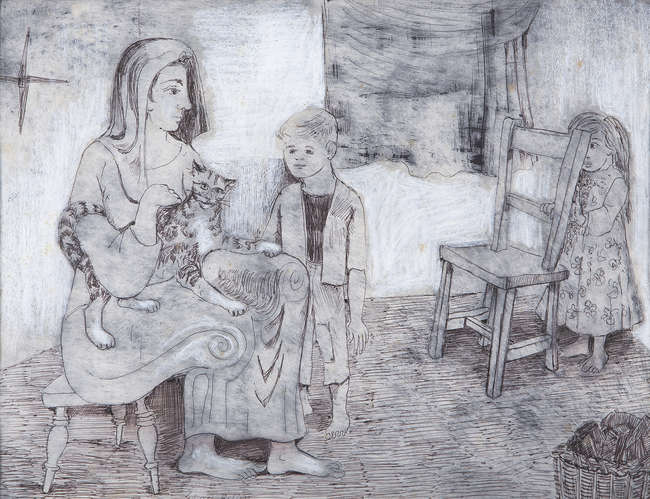