Australia v England 'Bodyline' 1932/33. Collection of eight original and complete copies of 'The Times' newspaper dated 2nd, 3rd, 4th, 17th January, 1st, 13th, 15th and 27th February 1933 . Each with interesting and extensive coverage of the Tests and some with reports and comment on the Bodyline controversy. The newspapers appear to have been bound in the past, some ageing and wear, otherwise in good clean condition. An excellent record of the 'timeless' series with immediate reaction to the controversies. Sold with 'The Times. M.C.C. Number 25th May 1937 with picture of Thomas Lord to front cover - cricket
Reports include:- Second Test, Melbourne, 30th December to 3rd January. The issue for 2nd January, p3 cols 2 & 3 reports on the close of the second day's play in the second Test at Melbourne with England struggling on 161-9 replying to Australia's 228. Comments include 'On Friday the "leg-theory" had been exploited [by England] with remarkable success, but today an orthodox attack [by the Australians] was even more successful'. 3rd January, p4 cols 6 & 7 reports on day three. 'The third day of the Test Match was even more remarkable even than the two that had gone before. Australia gained a lead of 59 runs on the first innings and seemed to be in a strong position, but then their batting except for Bradman [103no], Woodfull [26] and Richardson [32] failed miserably'. Australia were bowled out for 191, England ending the day on 43-0. 'Jardine handled his bowling admirably. He directed the attack and placed his field effectively... The prospects for to-morrow are for a keen fight with a tight finish'. 4th January, p5 cols 1&2. 'The Second Test Match which has seen many changes of fortunes and remarkable happenings, ended at 3 o'clock this afternoon, amid scenes of great enthusiasm, in a victory for Australia by 111 runs.' England having been bowled out for 169. The report focusses on the successes of the Australian spin bowling and the dominance of the bowlers throughout the match. Commenting on Woodfull, 'Like Jardine he was masterly in his captaincy. Jardine was more fussy and perhaps Woodfull's quiet method accomplished more'. Third Test, Adelaide, 13th-19th January. 17th January, p6 cols 1&2. The third day had ended with England in a strong position with a lead of 204 runs and nine wickets in hand. 'There had been mild demonstrations today when Ponsford was hit on the body, but when Oldfield was struck on the head by a ball from Larwood the crowd of over 35,000 gave vent to their feelings. Larwood was then bowling to an orthodox off field...'. 1st February, p4 cols 1&2. This issue features an article on 'Leg-Theory and Body-Bowling' following England's win in the Third Test at Adelaide by 338 runs. Page 10, col 6 quotes 'The text from the Australian Board of Control's reply to the M.C.C.'s telegram on the "body-line" bowling controversy... We appreciate your difficulty in dealing with the matter raised in our cable without having seen the actual play. We unanimously regard body-line bowling, as adopted in some games during the present tour, as opposed to the spirit of cricket and unnecessarily dangerous to the players. We are deeply concerned that the ideals of the game shall be preserved, and we have therefore appointed a committee to report on the action necessary to eliminate such bowling from all cricket in Australia as from 1933-34 season... We do not consider it necessary to cancel the remainder of the programme'. The main article considers the implications of 'the English captain is free to employ whatever tactics he considers suitable in the two remaining Test matches. If, however, there is any recrudescence of the disorderly behaviour which marred the Third Test Match at Adelaide it is possible that M.C.C., without further discussion, may issue orders for the abandonment of the tour'. The article continues with an analysis of the differences between, 'bumping' (short bowling), 'leg-theory' and 'body-line' bowling. Fourth Test, Brisbane, 10th-16th February. 13th February, p3 col 5. Reporting on the second day's play, Australia had been bowled out for 340, England 'having taken the last seven Australian wickets for 89 runs, they scored 99 without loss. 'It is frankly admitted that nobody can justly question the fairness of one single ball bowled'. 15th February, p6 cols 1&2. Resuming on 271-8 on day four, 'it was not expected that England would reach Australia's score. The wicket was beginning to wear... Paynter and Verity resumed their innings... They achieved the unexpected', England's innings closing on 356. In A

THE BODYLINE SERIES - A STUMP THAT WITNE 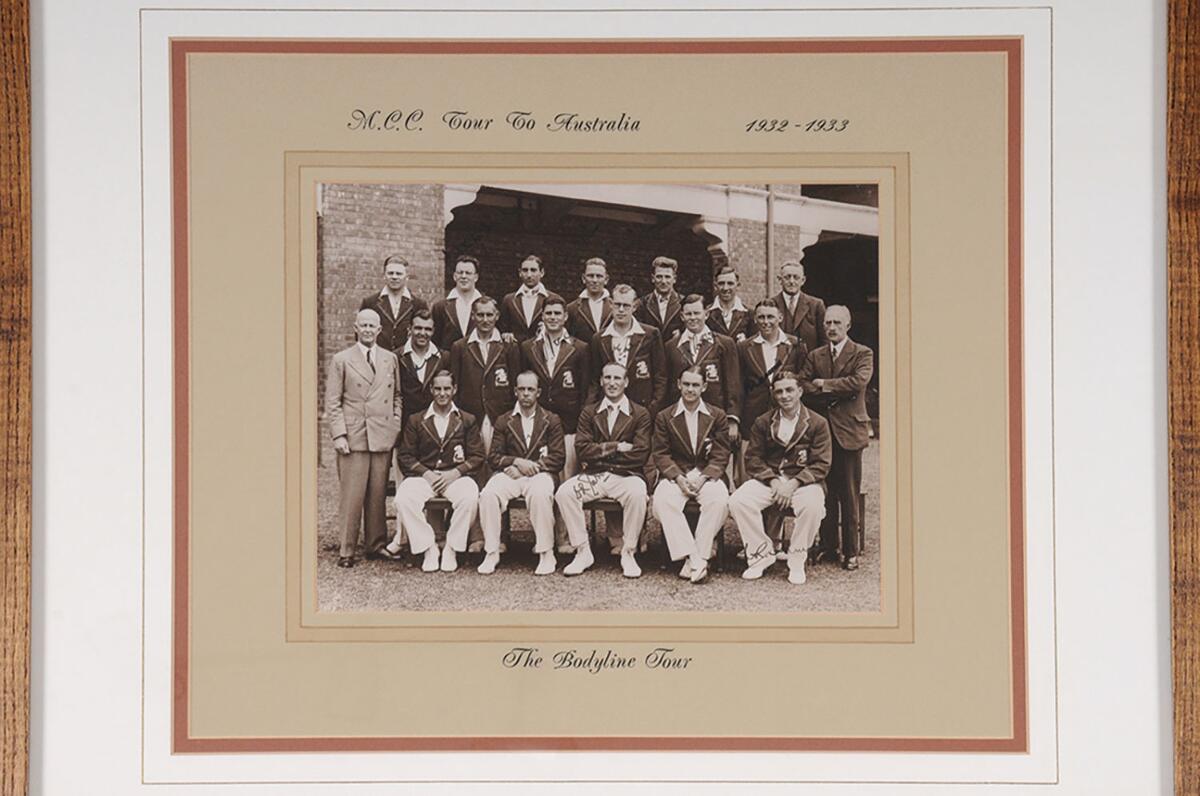