ATTIC CARVED MARBLE HEAD OF A GIRL On

ATTIC CARVED MARBLE HEAD OF A GIRL On mottled green marble, block-form stand. 3 3/4 x 2 3/4 x 3 3/8 in., on stand 6 1/2 in. Provenance: Mikas, Paris, 1924; The Collection of Albert Gallatin New York. Literature: M. Bieber, Arndt-Amelung , Bruckmann, Munich 1938, no 4490, illustrated. Note: According to Albert Gallatin's autobiography, The Pursuit of Happiness (published in 1950), Albert Gallatin studied painting under Thomas Moran and continued painting throughout his life being particularly inspired by the landscape and light of Martha's Vineyard. His interest in his contemporary artists led him to purchase paintings by Corot, Courbet, Delacroix, Whistler and Gauguin as well as sculptures by Rodin, Jennewein and his great friend Paul Manship with whom he spent much time as they both had studios in the same building on 57th Street. The scope of Mr. Gallatin's other collections was extraordinarily wide ranging, he was particularly interested in Greek vases and, in all, he collected over 200 examples, which were published in 2 volumes of the Corpus Vasorum Antiquorum, (Fascicules 1 and 8). When his townhouse on 67th Street was sold in 1941, almost the entire collection was bought by the Metropolitan Museum. He also was passionate about Ancient Egyptian art, his pieces forming a single collector exhibition at the Brooklyn Museum. His other interests included: rare books, Khymer and Benin sculptures, and he created an extensive collection of Japanese paintings and prints. In 1930 Mr. Gallatin's Syracusan Dekadrachms of the Euainetos Type was published. He was a Member of the Committee for the Corpus Vasorum Antiquorum of the Council of Learned Societies, a Governor of the American Numismatic Society, a Trustee of the Archaeological Institute of America and a Trustee of the Brooklyn Institute of Arts and Sciences. Mr. Gallatin was a member of various clubs, including The Century Club, The Union Club and The Salamagundi Club. Collection of Mrs. James Gallatin, NY

A HELLENISTIC OR ROMAN MARBLE HEAD OF A

ATTIC CARVED MARBLE HEAD OF A GIRL On ve 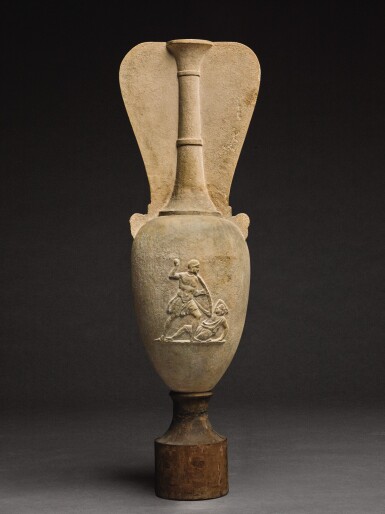