AMERICAN REVOLUTION -- INTOLERABLE ACTS]. GREAT BRITAIN, Parliament. The following extraordinary BILLS, pending before the British Parliament, arrived at Night in Capt. Williamson, in 36 Days from Bristol. Boston, June 3, 1774 . Salem: Printed by S[amuel] and E[benezer] Hall, 1774. 2pp. folio, heading on p.1, text in three columns, imprint at base of last column, light browning, upper margin ragged, small fold tears with loss of several letters . LIGHTING THE REVOLUTIONARY FUSE: NEWS OF THE "INTOLERABLE ACTS" SPREADS THROUGHOUT THE COLONIES The crates of tea the Sons of Liberty hurled into Boston harbor on 16 December 1773 triggered a powerful retaliatory response the other end of the Atlantic. In this rare Salem broadside, two critical enactments of the British Parliament--the Massachusetts Government Act and the Administration of Justice Act--are reported, based on news from Captain Williamson's newly arrived packet from Bristol. These acts, with the Quartering Act and the Boston Port Act, comprised what Britons termed the "Coercive Acts," known in America as the "Intolerable Acts." The complete text of each act is presented: "Whereas in his Majesty's Province of Massachusetts-Bay, in New England, an attempt hath lately been made to throw off the Authority of the Parliament of Great Britain," the text begins, "and an actual and avowed Resistance, by open Force, to the Execution of certain Acts of Parliament hath been suffered to take place...to the utter Subversion of all lawful Government," the King has moved to take political power out of the hands of the colonists. His response had been heavily influenced by General Thomas Gage. Under the "Bill for the better regulating the Government of the Province of the Massachusetts Bay," town meetings were suspended and crown appointees were to replace local elected officials. The "Bill for the Impartial Administration of Justice" specified that persons indicted for "Murther or other capital Offence" were to be tried in some other colony or even in Great Britain. The Port Act sealed off the colony's trade and the Quartering Act gave the new governor and military commander-in-chief (Gage himself) power to commandeer housing. Ironically, the Coercive Acts spurred colonial resistance throughout the colonies, and hastened the convening of the First Continental Congress. Gage, alarmed at the potential for armed resistance, decided to carry out a set of swift, surgical strikes against patriot arsenals in the region, including one at Concord. There, in April 1775, the revolutionary fuse lit by the Intolerable Acts would explode into armed rebellion. Rare. Evans 13305; Ford 1736. 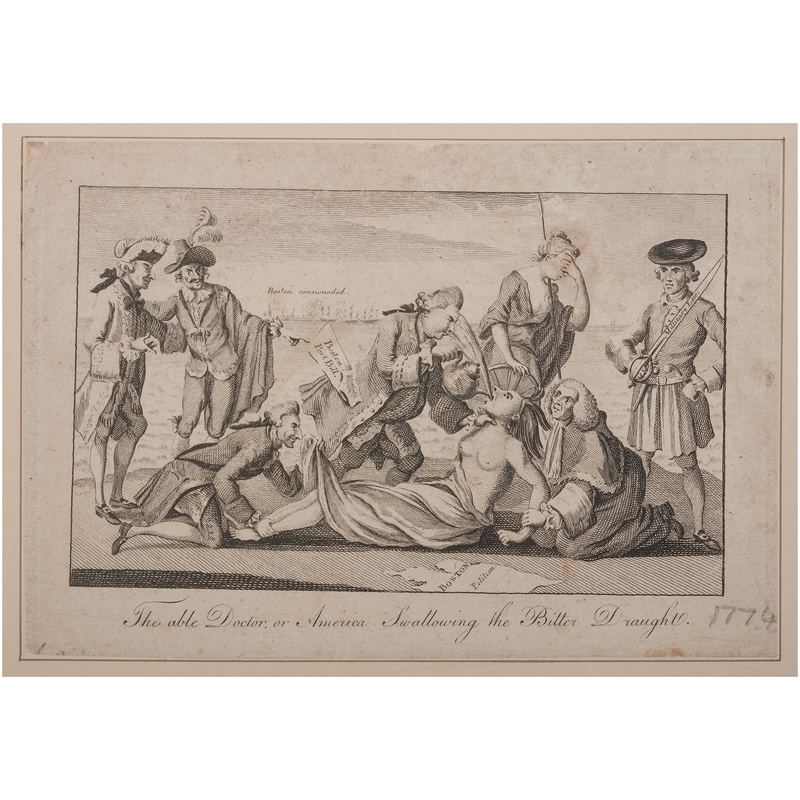 1775 Almanac with death of the "Virtuous