Alexander Calder Two Horizontals and Nine Verticals incised with the artist’s initials “CA” on the largest red element sheet metal, wire and paint 19 x 60 x 15 1/4 in. (48.3 x 152.4 x 38.7 cm.) Executed in 1956, this work is registered with the Calder Foundation Archives under Application #A07391.
Provenance Perls Galleries, New York Myrtle Todes Art Gallery, Glencoe (acquired from the above circa 1959) Nora Bergman, Chicago (acquired from the above in 1960) Ronna Lerner, Chicago (by descent from the above in 2000) Thence by bequest to the present owner in 2003 Exhibited Oberlin, Allen Memorial Art Museum, Sculpture 1950-1958, February 14 – March 17, 1958 Literature “Sculpture, An Exhibition 1950-1958,” Allen Memorial Art Museum Bulletin, vol. XV, no. 2 (Winter 1958), no. 6, p. 68 (illustrated) Catalogue Essay "Why must sculpture be static? You look at abstraction, sculptured or painted, an entirely exciting arrangement of planes, nuclei, entirely without meaning. It would be perfect but always still. The next step is sculpture in motion." Alexander Calder Alexander Calder’s contribution to the development of the plastic arts in the twentieth century cannot be overstated. Jean-Paul-Sartre, to whom Calder once gifted a small mobile, best summarized the radical implications of such stunning works as Two Horizontals and Nine Verticals, 1956: “Mobiles have no meaning, make you think of nothing but themselves. They are, that is all; they are absolutes. There is more of the unpredictable about them than in any other human creation. No human brain, not even their creator's, could possibly foresee all the complex combinations of which they are capable. A general destiny of movement is sketched for them, and then they are left to work it out for themselves. What they may do at a given moment will be determined by the time of day, the sun, the temperature or the wind. The object is thus always half way between the servility of a statue and the independence of natural events; each of its evolutions is the inspiration of a moment." (Jean-Paul-Sartre, "The Mobiles of Calder," Alexander Calder exh. cat., Buchholz Gallery, New York, 1947) Included in a 1956 scholarly survey of sculpture at the Allen Memorial Museum of Oberlin College, Two Horizontals and Nine Verticals, has remained in the same private collection since its initial purchase. The work represents Calder working at his highest level in his most iconic style. His synthesis of color, form and movement is the culmination of many achievements in western art during the first half of the twentieth century. Suspended elegantly from the element bridging the horizontal forms to the vertical ones, Two Horizontals and Nine Verticals could be seen as a strictly two-dimensional object – beautifully colored and sculpted flat forms arranged along a thin line. However, the faintest breath of wind sets the forms in motion. First, it’s in three dimensions; then, with motion and time, all four. Inspired by the fractured planarity of the Cubists, the pure color of de Stijl, the element of play from the Dadaists, and the transformative nature of the Surrealists, Calder executed a beautiful and dynamic sculpture for the modern age. The whole composition is evocative of a sort of stylized, deconstructed flowering plant: branching off to one side of the balanced arrangement are nine vertical elements – six black and three red forms delicately arching out, up, and down. The primary five black forms read as the petals, irregular quadrilaterals following a predetermined organic pattern; whereas the two topmost red forms are most like the pistil and stamen, arching in peculiar bends yet with their own self-contained symmetry and balance. The dagger-like red element grounds the composition, reaching towards the ground while the final vertical black element, shot through with negative space, is like another flower all unto itself. The final two horizontal elements, blue and black respectively, complete the composition like the two branching leaves or boughs extending beyond the flowering crowns of the piece. In these ways, Calder achieved a particular genesis within his art – not exactly imitative but quite actually embodying those same elemental and living qualities that shape the natural realm. Two 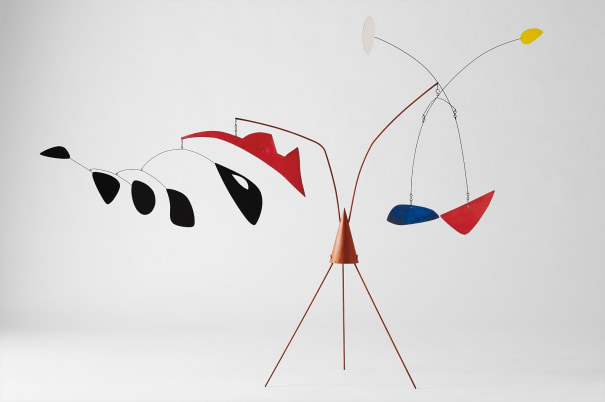 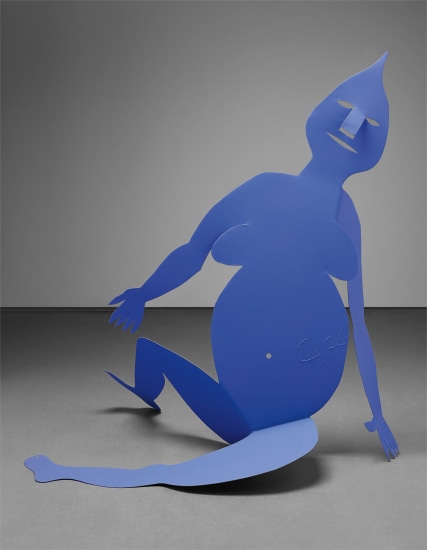 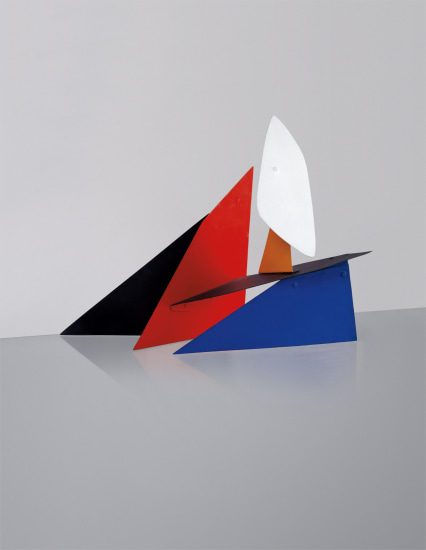 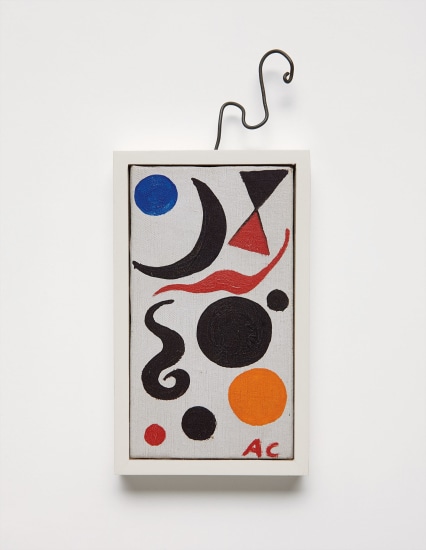 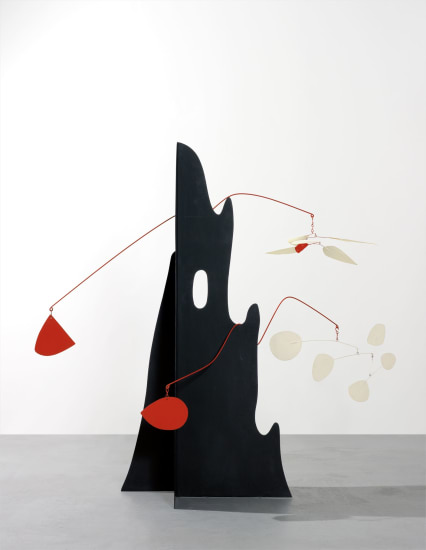 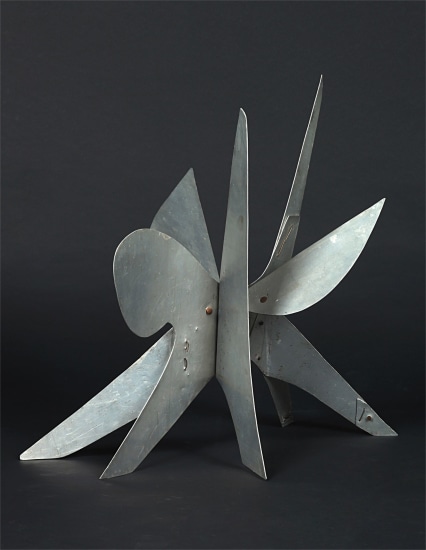 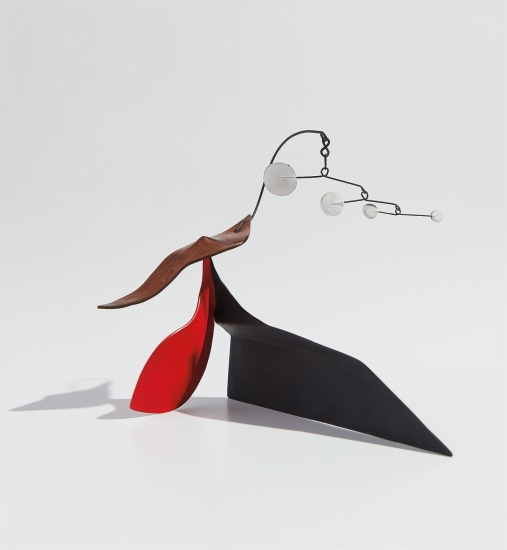 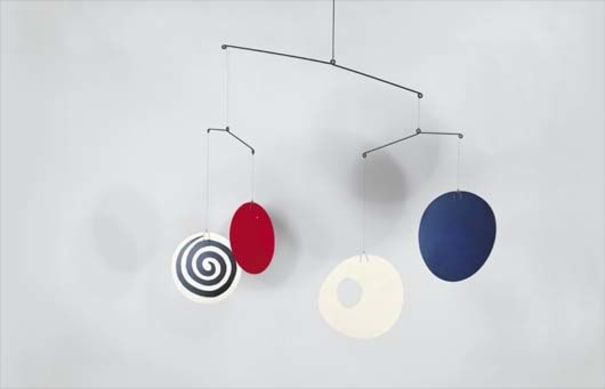