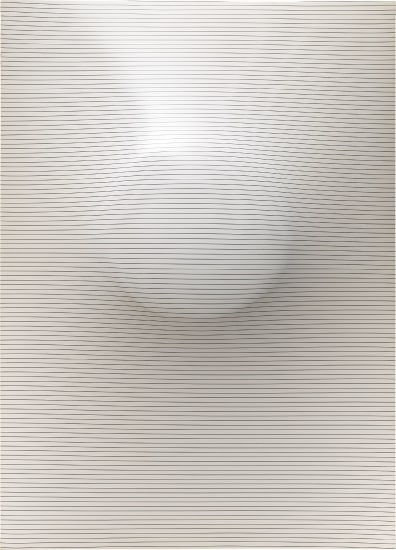 Agostino Bonalumi Follow Bianco e Nero signed and dated 'Bonalumi '68' on the reverse shaped ciré 115 x 83 cm (45 1/4 x 32 5/8 in.) Executed in 1968, this work is accompanied by a certificate of authenticity signed and dated by the artist and is registered in the Archivio Bonalumi under no. 68-056.
Provenance Galleria Il Nuovo Sagittario, Milan Private Collection Exhibited Modena, Galleria Civica d’Arte Moderna, Bonalumi, 1974, no. 48 (illustrated) Mantua, Palazzo Te, Bonalumi, Milan, 1980, p. 24 Perugia, Centro Espositivo Rocca Paolina, Oltre La superficie, 14 July – 2 September 2001, p. 65 (illustrated) Catalogue Essay Extremely rare and executed in 1968, Bianco e Nero is one of only six known black and white examples of Agostino Bonalumi’s exploration of striped surfaces in the material ciré, marking a pivotal moment in the artist’s career. The present work similarly celebrates Bonalumi’s examination of the formal qualities of materials, particularly in his manipulation and movement of ciré to play with the appearance of the picture surface. Celebrated for his plastic, monochrome extroflections , shapes that emerged from stretched canvases, the artist breaks through the two-dimensional picture plane in the present work capturing the essence of the medium. Bianco e Nero is a distinct example from the prolific oeuvre of an artist who has tenaciously followed his own path for decades and has radically reconsidered the entire nature of painting itself. Diffusing a new dynamism into post-war Italian art after abandoning his formal studies of technical and mechanical design, Agostino Bonalumi’s knowledge of construction inspired his artistic output, whereby he examined the differing effects on the eye by manipulating form and colour in conjunction. In the present work, Bonalumi’s use of alternating black and white line emphasises the artist’s preoccupation with the dynamic perception of tone, a central element in his exploration of light and space. Bonalumi surpasses colour in favour of the luminous interplay of dark and light, which changes with the positioning of the viewer and the alteration of the light source. A mysterious presence lurks beneath the surface; a circular bulge distorts the picture plane, invoking the artist’s interest in modulation and optical illusion. Elegant in its geometrical order, space is not only investigated in Bianco e Nero within the confines of the surface, but physically stretched outside of its own boundaries. In 1967, while working in New York to prepare for his celebrated first solo show in the United States at Galeria Bonino, the artist discovered the industrial material, ciré. Further developing his investigations into the idea of space, Bonalumi explored the effects of this unconventional, flexible and shiny material, harnessing its unique reflective and malleable qualities to manipulate the structural possibilities of the work. As Francesca Pola states, ‘ciré also attracted Bonalumi because of its compactness and chromatic timbre and the way in which the surface tensions distorted the geometry, as in the works executed with striped ciré, in some of which extroflections and introflections combine centric and linear dynamics’, (Francesca Pola, Agostino Bonami: All the Shapes of Space, 1958 – 1976 , Milan, 2013, p. 120). Evoking a rhythmic vibrancy, material and colour are at once united, coursing with vital energy. Executed in 1968, Bianco e Nero is a pivotal example of the artist’s primary concern with perception, utilising optical illusion, structural manipulation, light effects and the evocation of space. No longer just a support for painterly application, the canvas is transformed, becoming a mouldable spectacle where all things are possible. Influenced by Lucio Fontana’s creative legacy, Bonalumi was concerned with the idea of space and breaking through the flat surface into the three-dimensional. Unlike Fontana, however, Bonalumi appeared less interested in the space behind the canvas and more intent on architecturally penetrating the space in front of it. Demonstrated in his Pittura Oggetto, famously coined by art critic Gillo Dorfles in 1966, the artist was interested in the idea of extending the canvas to the space inhabited by the viewer. Bonalumi belonged to a generation of I 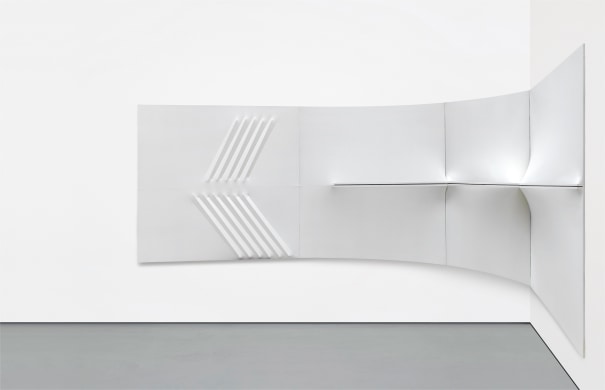 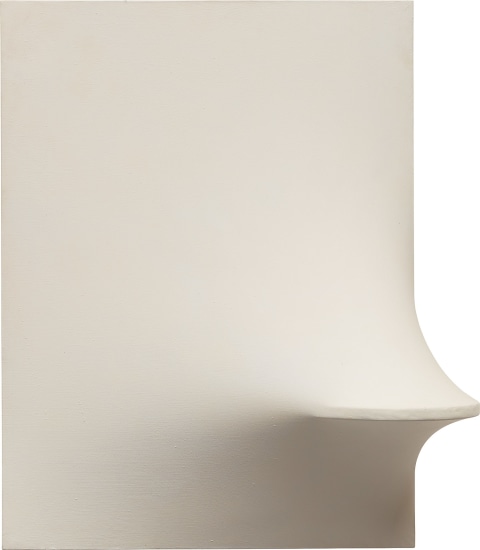 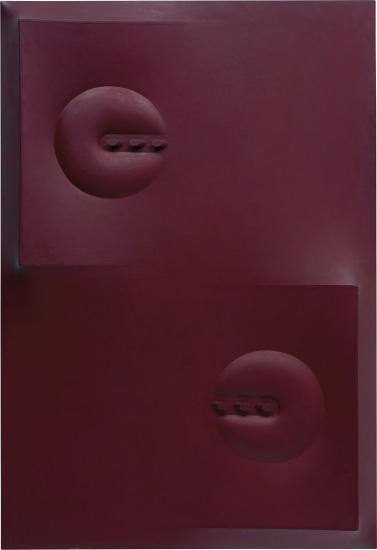 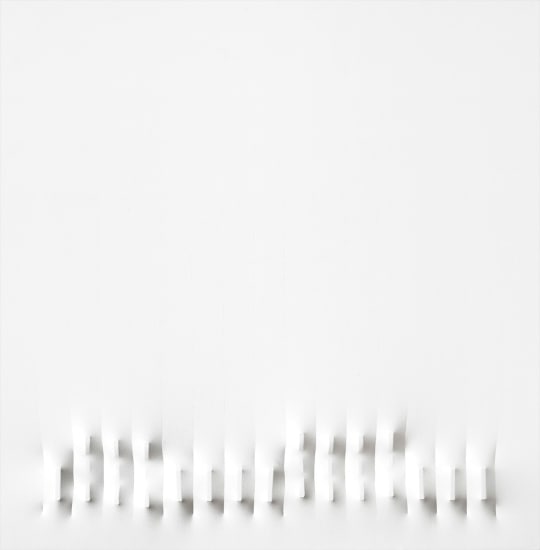 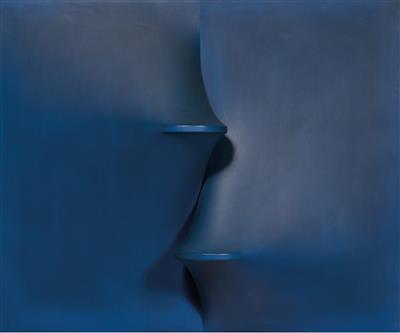 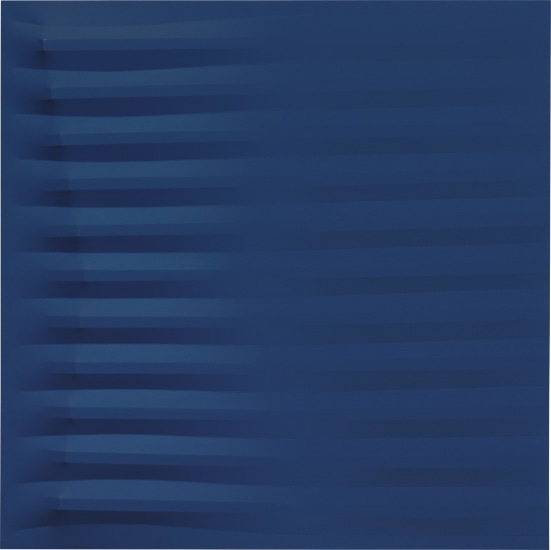 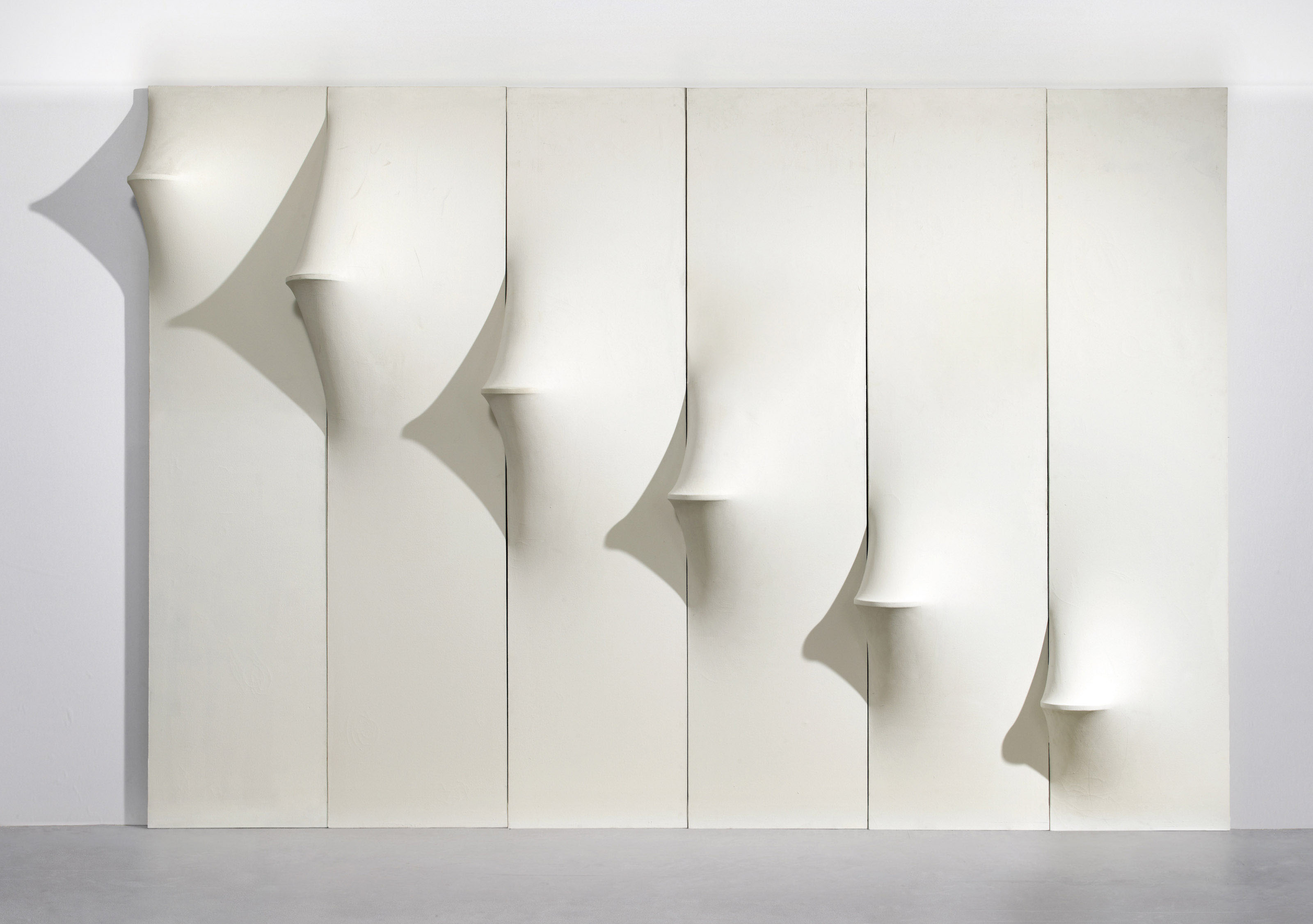 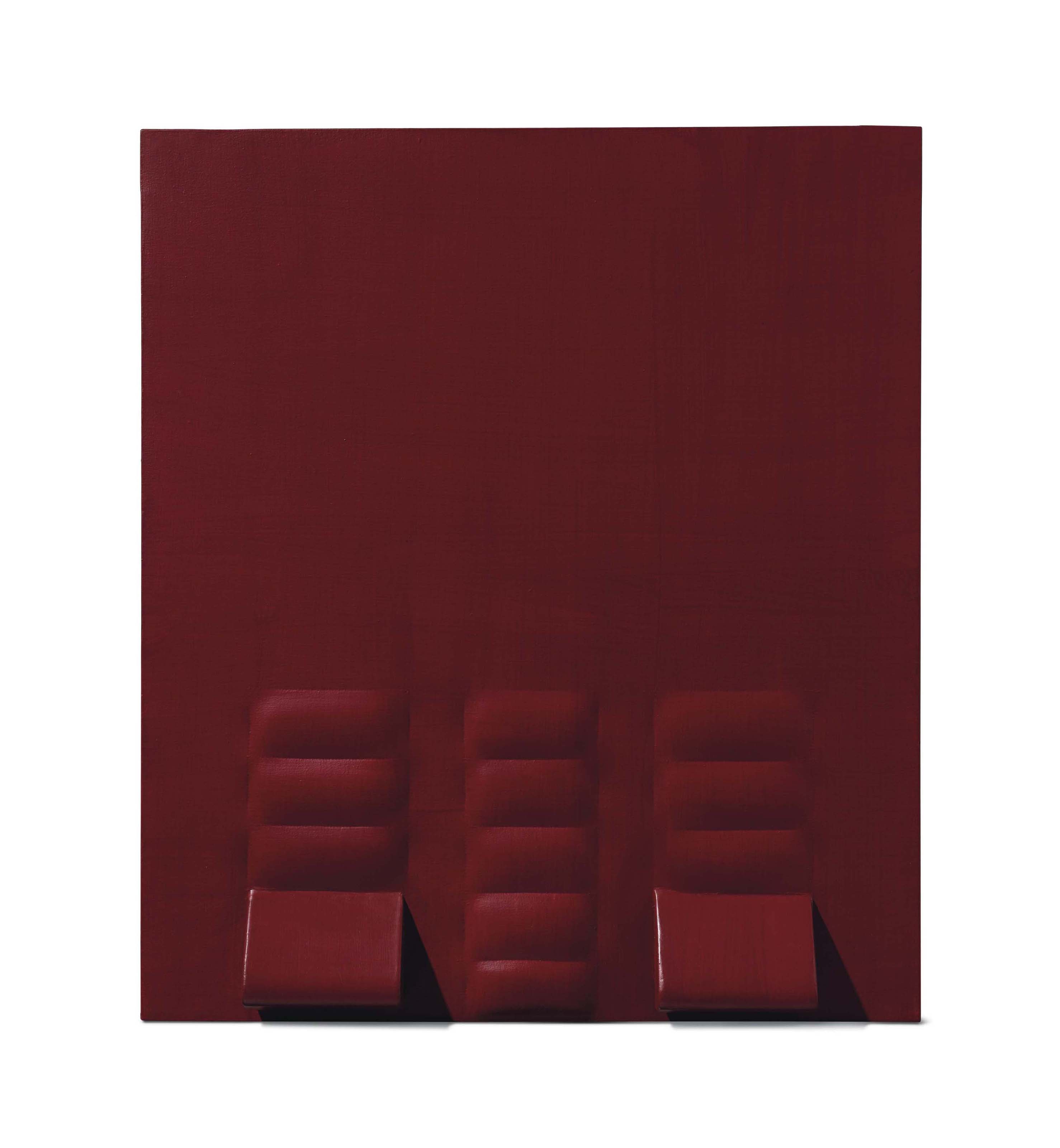