A VICTORIAN BRASS BOX SEXTANT PRESENTED TO GENTLEMAN CADET A. JOPP OF THE EAST INDIA COMPANY 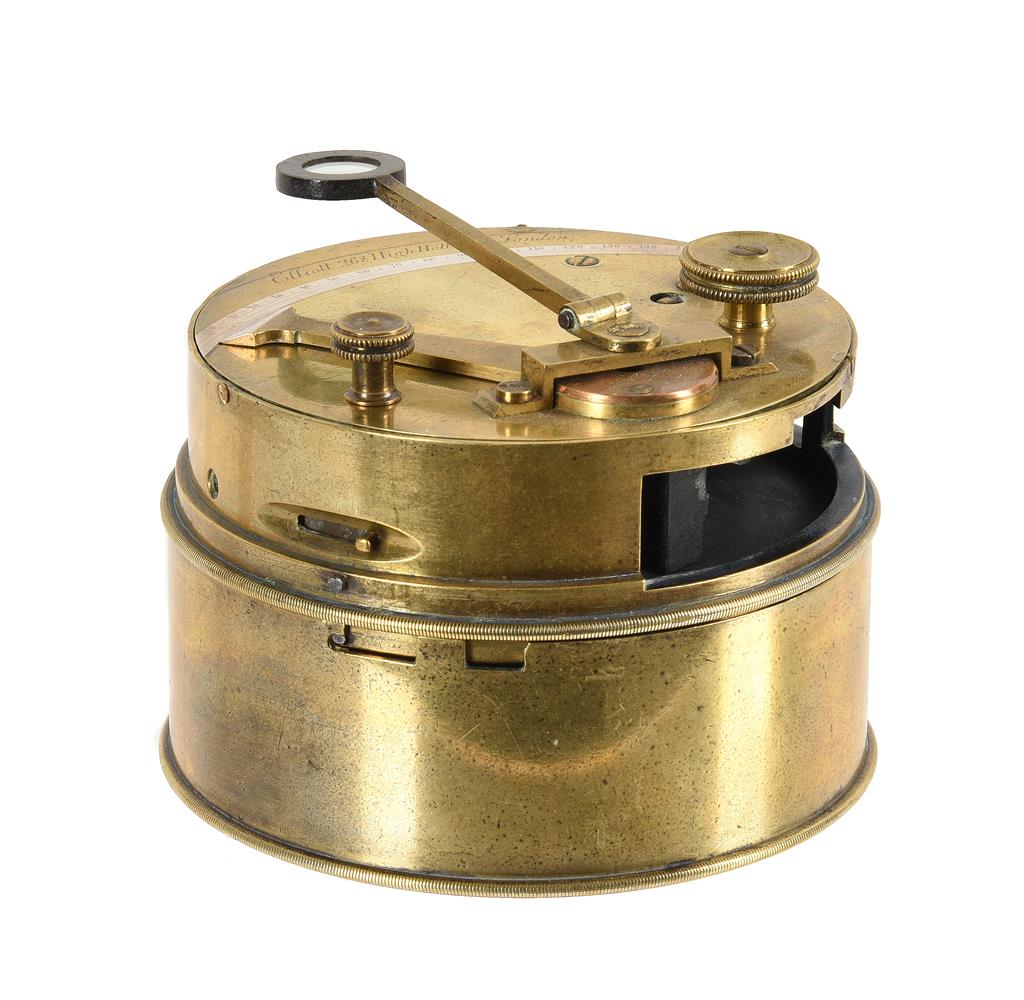 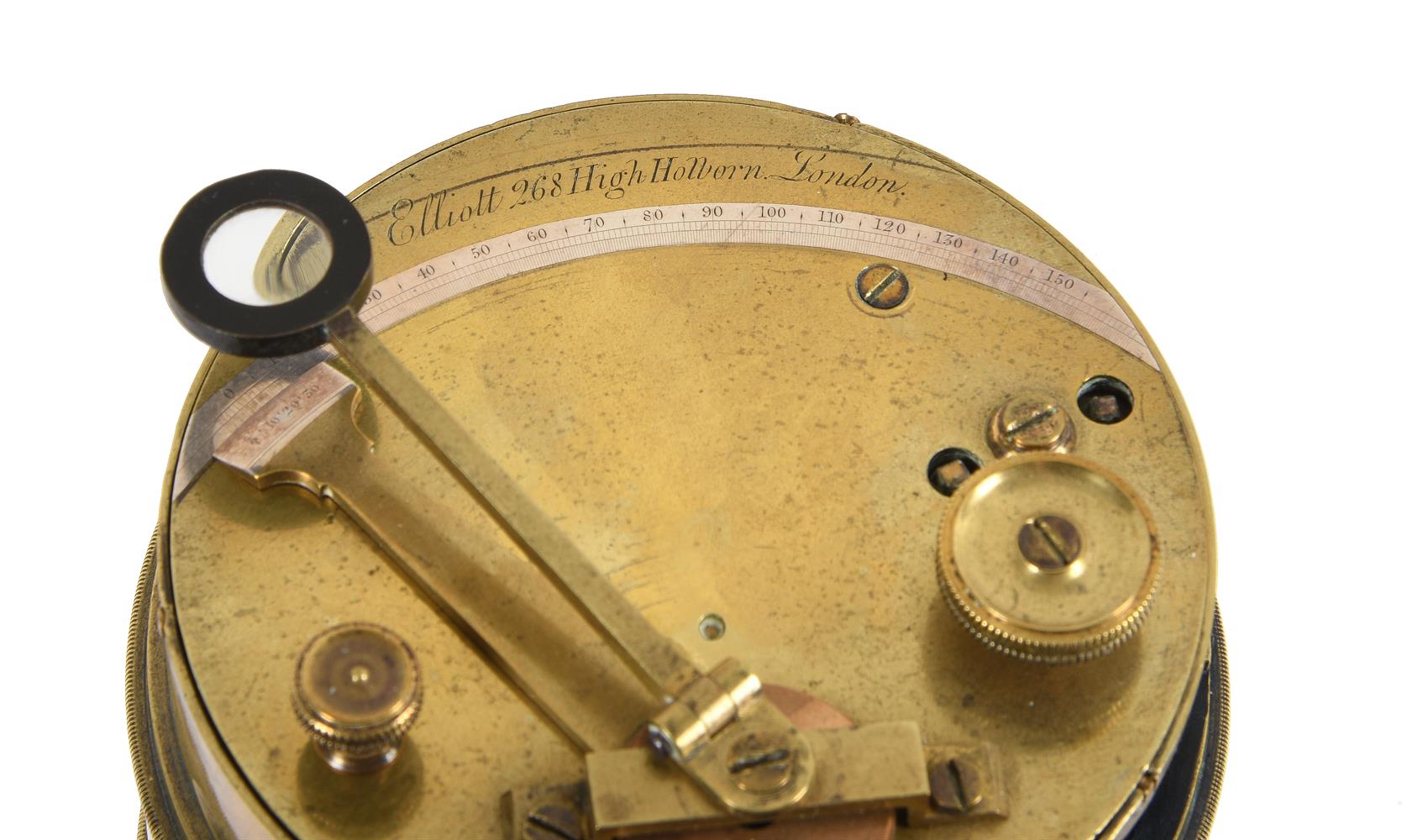 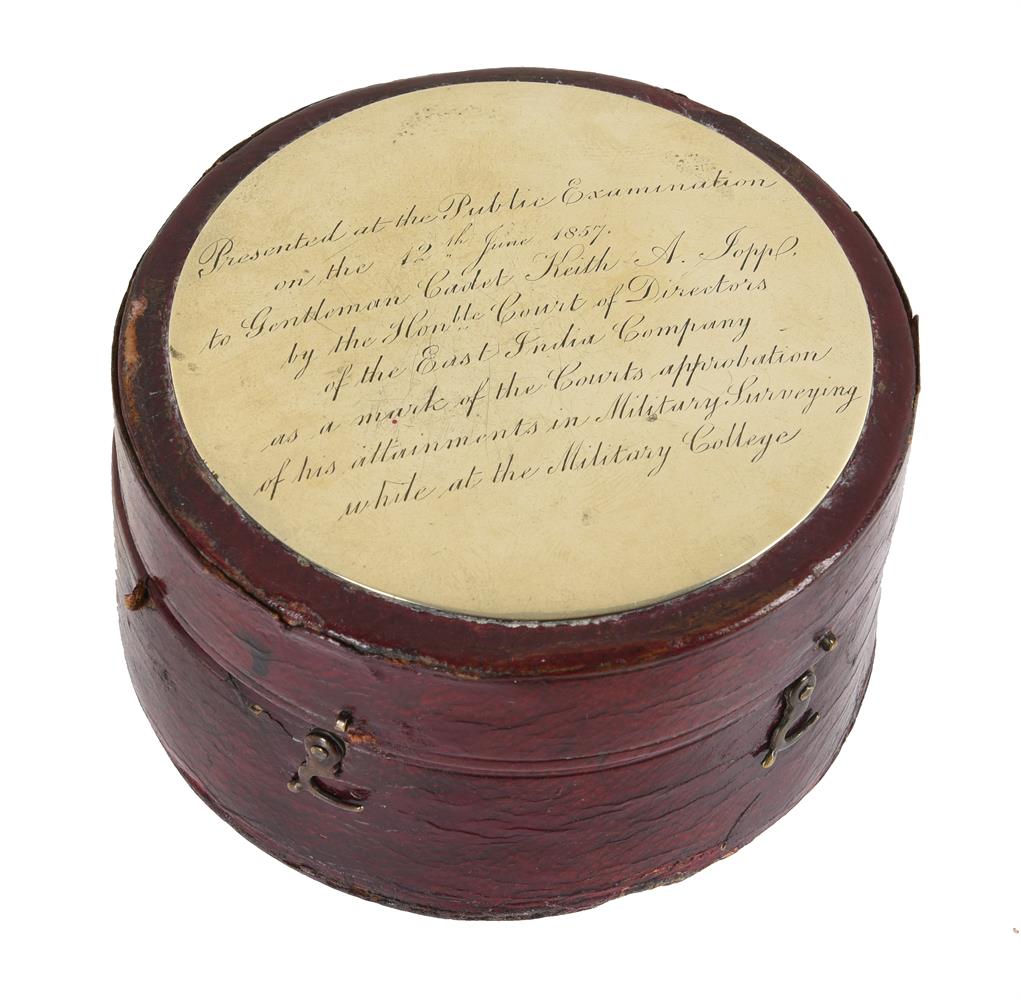 A VICTORIAN BRASS BOX SEXTANT PRESENTED TO GENTLEMAN CADET A. JOPP OF THE EAST INDIA COMPANY Elliott, London, circa 1857 circular top plate with screw for rack and pinion index mirror adjustment against a fine inset silver Vernier scale with magnification arm and signature Elliott, 268 High Holborn, London to outer margin, the circumference with sliding shutter for the pin hole sight, the instrument enclosed by a bayonet secured canister-shaped cover, the original blue velvet lined cylindrical red morocco covered box with brass presentation plaque to top finely engraved with the text Presented at the Public Examination, on the 12th June 1857., to Gentleman Cadet Keith A. Jopp., by the Hon'ble Court of Directors, of the East India Company, as a mark of the Courts approbation, of his attainments in Military Surveying, while at the Military College. Diameter of instrument 8cm (3.125ins); diameter of box 9cm (3.5ins). The current lot is almost certainly by the partnership of the brothers Frederick Henry and Charles Edward Elliott Elliott who are recorded in Clifton, Gloria Directory of British Scientific Instrument Makers 1550-1851 as continuing the family business after the death of their father in 1853. The life of Keith Alexander Jopp has been extensively researched by the vendor; a file including scans of original period photographs is included with the lot. Keith Jopp was born in July 1838 at Ooctacamund, Southern India. His father was a Major in the Bombay Engineers of the East India Army. Keith attended Cheltenham College and was nominated to attend the East India Military Training College at Addiscombe. In 1858 Keith Jopp entered into Sappers and Miners of the Bombay Engineers as an Ensign elevating to 2nd Lieutenant by the time he arrived at the HQ of the Bomaby Engineers in Poona, India in May 1859. By December 1969 he had reached rank of 2nd Captain of the Royal Engineers (the Bombay Engineers had been renamed a few years prior) but was on furlough in England. In 1872 he returned to Bombay but was back again in England before the year was out to marry Mary Egerton Smith with whom he had two daughters Leila in 1873 (who sadly died in infancy) and Clara the following year. In April 1874 Jopp was promoted to the rank of Major and was back in Bombay by the end of the year. Over the next decade he travelled back and forth between England and Bombay however in 1879 his wife Mary sadly died in Kensington which led to a period of special compassionate leave. In November 1884 Keith Jopp was furloughed again but was back in Bombay in December the following year having been promoted the Lieutenant Colonel, Royal Engineers. He was by this time Deputy Consulting Engineer, 1st Grade in the Public Works Department at Madras and by time of his retirement in 1891 he had been further promoted to rank of Colonel. In the 1901 census Keith Jopp was recorded as a retired Colonel residing at 69 Eaton Rose, Ealing; by 1911 he had moved to Atheldane, Westgate-on-Sea, Kent and his death was recorded at Thanet in spring 1920. Condition Report: Instrument appears complete and is in working condition albeit with some noticeable wear and light bumps, scuffs etc. The mirror has some noticeable degradation of the silvering to the margins, the Vernier scale has only light rubbing/wear but is still legible when viewed through the magnification lens. The cover is in good condition. The outer case has survived in good original condition although the hinge has been re-attached to the base section. The instrument is a very snug fit and the outer leather covering has some light bumps, scuffs etc. Condition Report Disclaimer

A VICTORIAN BRASS BOUND WORK BOX AND A S 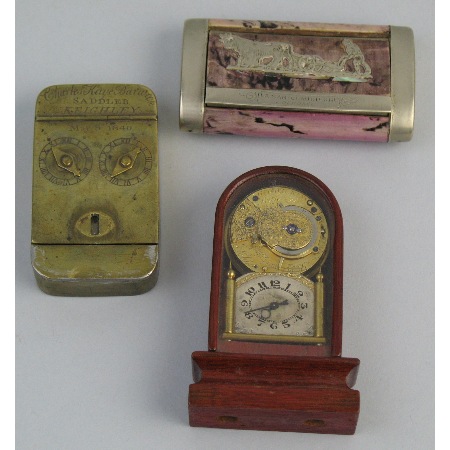