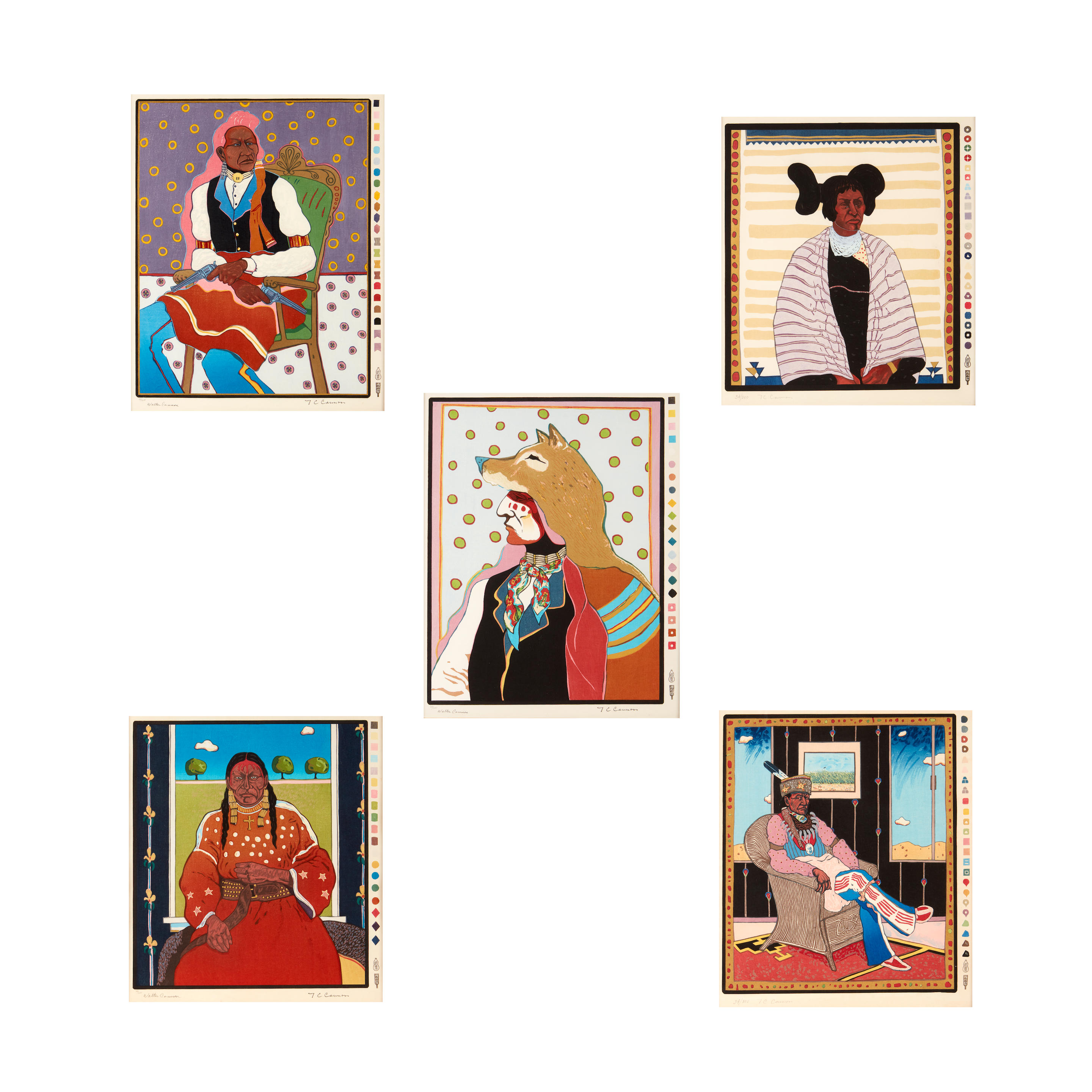 Property from the Royle Freund Aspen Collection, Lots 18-20 T.C. Cannon Kiowa, (1946-1978), Five works: "Two Guns Arikara," "His Hair Flows like a River," "Hopi with Manta," "Woman in Window," and "Collector #5," each edition 34 of 200, "Hopi with Manta," and "Collector #5," each signed in pencil by the artist lower left; "Two Guns Arikara," "His Hair Flows Like a River," and "Woman in Window" with artist's printed signature lower right, signed in pencil by Walter Cannon (the artist's father) lower left. each paper size 20in x 25in Fußnoten This suite of woodblock prints was created in partnership with master Japanese woodcutter Maeda and printer Uchikawa. Work on the images for the suite began in 1975. This suite features metallic accents and borders Cannon increasingly employed later in his career, inspired by his admiration for the work of Viennese artist Friedensreich Hundertwasser, well-known for his bright palette and use of metallic pigments in his paintings and prints. "Graphic works had been integral to Hundertwasser's widespread international recognition. He had created large editions of silk screens and smaller Japanese woodcut editions in which certain colors were replaced with metallic imprints. In 1977 Aberbach Fine Art published for Cannon a suite of five woodcuts... the blocks were cut and the prints were made by the same Japanese masters who had produced those for Hundertwasser, in the same workshops." (Rettig, David, "Witness to Genius," from Marshall, Ann E. and Pardue, Diana F., Of God and Mortal Men: T.C. Cannon, Museum of New Mexico Press, Santa Fe, NM, 2017, p. 65-67. Cannon was only able to personally sign the first two woodcuts from the suite ("Collector #5" and "Hopi with Manta") before his death in an automobile accident in 1978. Posthumously, the suite was dubbed the "Memorial Woodblock Suite," and Cannon's printed signature was added to the remainder of the already-completed works. Cannon's father, Walter, then added his hand-signed signature on behalf of his son. 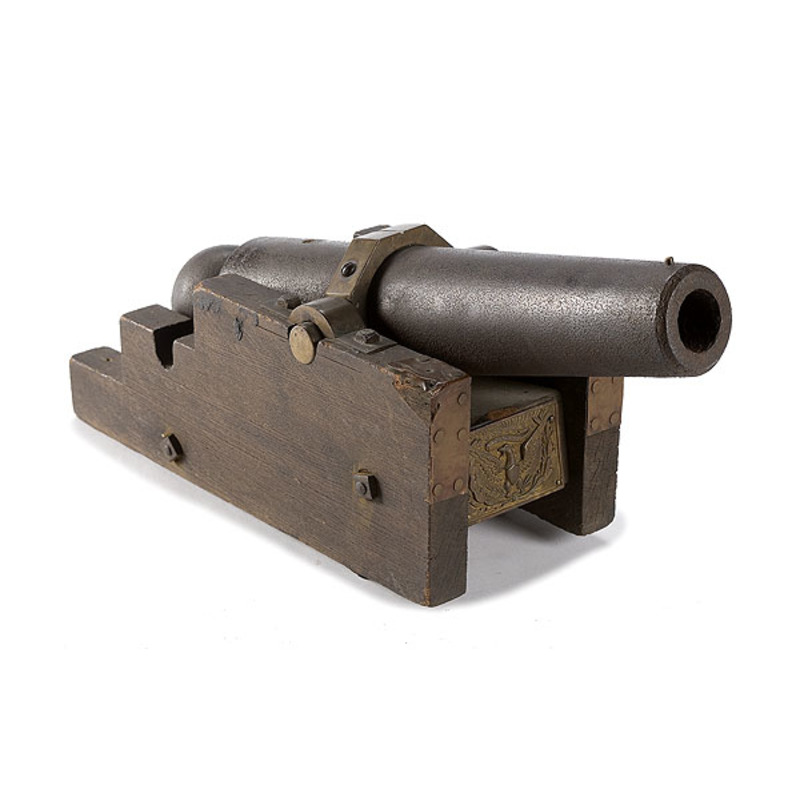 A GROUP OF MINIATURE CANNON, comprising

An Iron and Brass Model of A Cannon, Two 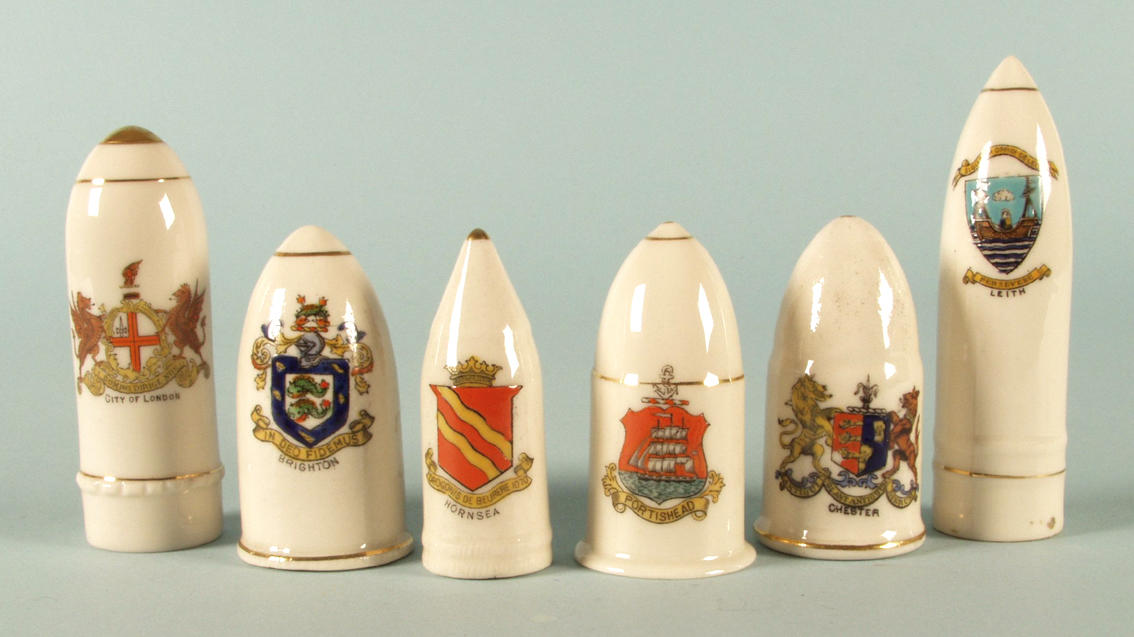