A set of eight George II walnut side chairs, circa 1730, possibly Irish, each shaped …

A set of eight George II walnut side chairs, circa 1730, possibly Irish, each shaped rectangular back with slender foliate carved surround and surmounted by a floral and foliate carved terminal, each herringbone banded vase splat above a drop in seat covered with an 18th century floral needlework panel , on acanthus carved cabriole legs joined by stretchers and terminating in carved lion paw feet Provenance: Robert Wood Bliss (1875-1962) Acquired together with an ensuite settee by French & Company 13th June 1962, possibly after de-accession by Harvard University Sold by French & Co. 2nd August 1968, possibly to Mr Nelson M. Davis Acquired by the Grandmother of the present owner. Please note that in addition to the published footnotes for this lot, after the catalogue for this auction was printed, it came to light that the Grandmother of the present owner purchased the current set of eight chairs from Mallet Antiques in 1988. A copy of the receipt for the purchase of the chairs is available. The property of the owners of the Downton Estate, Shropshire Literature: French & Company stock book ref. E-534/51228-X, held by the Getty Institute Research Library, Los Angeles, CA Loans: The Virginia Museum of Fine Arts 15th May 1963 - 2nd August 1963 Maison Blanche 12th September 1963 - 2nd October 1963 The Centre for Outer American Relations 11th September 1967- 4th October 1967 Robert Woods Bliss (1875-1962) R. W. Bliss, an American diplomat who later cofounded the Dumbarton Oaks Research Library and Collection, Washington D.C., was educated at J. P. Hopkinson’s School in Boston before attending Harvard College and gaining a B.A. in 1900. After embarking on his diplomatic career including a posting as secretary to the Governor of Puerto Rico, U.S. Consul in Venice, second secretary to the U.S. embassy in St Petersburg and secretary of the legation in Brussells, Bliss married Mildred Barnes in 1908. His Foreign service continued with successive appointments in Buenos Aires, Paris and the Hague. Together with his wife, he was instrumental in founding the American Field Ambulance Service in Paris during 1914 to which they supplied twenty three ambulances and three staff cars. In addition they opened and equipped the 'Service de Distribution Américaine', which distributed medical supplies and clothing. Whilst in Paris their circle of friends included Walter Gay, Edith Wharton and Royall Tyler. After the end of the First World War, Robert became chief of the Division of Western European Affairs at the Washington State Department in 1920 which was the same year he acquired his future home Dumbarton Oaks. He followed this with a role assisting the Secretary of State before becoming U.S. Envoy to Sweden and later U.S Ambassador to Argentina. The latter appointment occupied him for six years until his retirement from the Foreign Service in 1933. Bliss returned to the State Department during the Second World War (1942-1945) during which time he arranged a succession of important diplomatic meetings at Dumbarton Oaks in 1944 known as the 'Dumbarton Oaks Conference' whose delegates collaborated over proposals for the foundation of an organisation to maintain world peace and security. The culmination of these meetings was the 'United Nations Charter' which was adopted in San Francisco in 1945. In later life Bliss held a number of senior positions with American art institutions, museums and political organisations including the American Federation of Arts, the Smithsonian Art Commission, the Carnegie Institution and the American Foreign Service Association. He also received honorary Doctor of Law degrees from the universities at Syracuse, Harvard and Missouri. In 1954 he was among five ex-diplomats co-signing a letter of protest at Senator Joseph McCarthy’s attacks on the Foreign Service. The Blisses had no children and Robert died in Washington D.C. in 1962 at the age of 86. Dumbarton Oaks The land on which the present house is situated originally 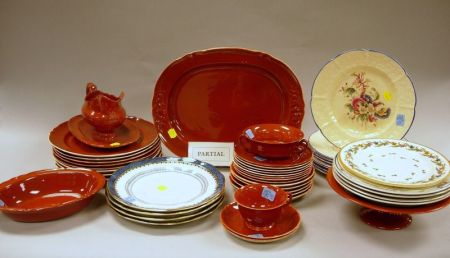 unused An accumulation on leaves which i

A set of eleven and a set of eight Spani

A SET OF EIGHT FRENCH PORCELAIN BLUE AND