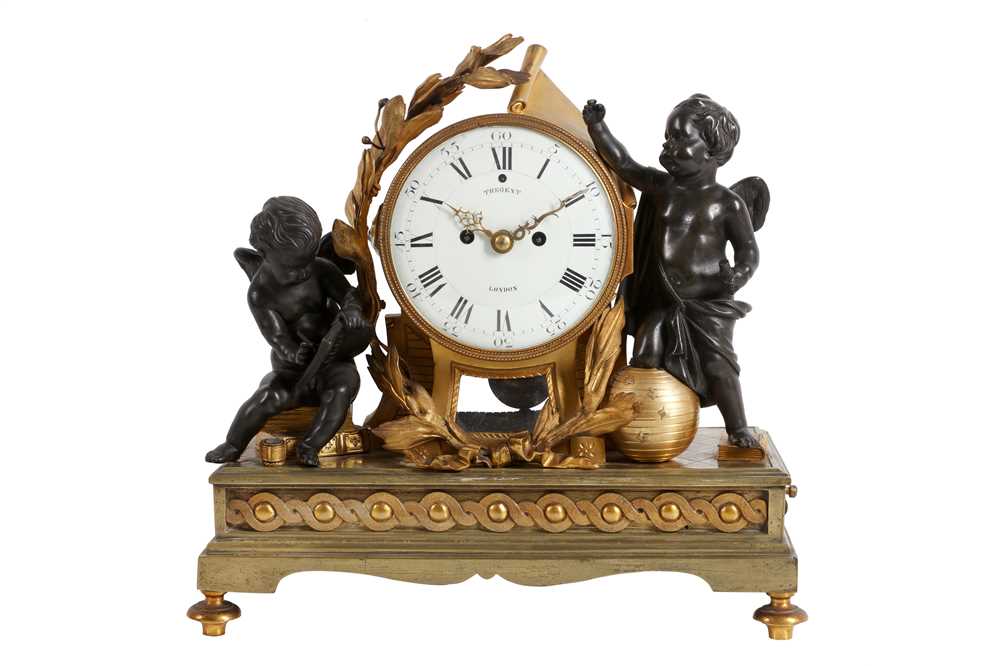 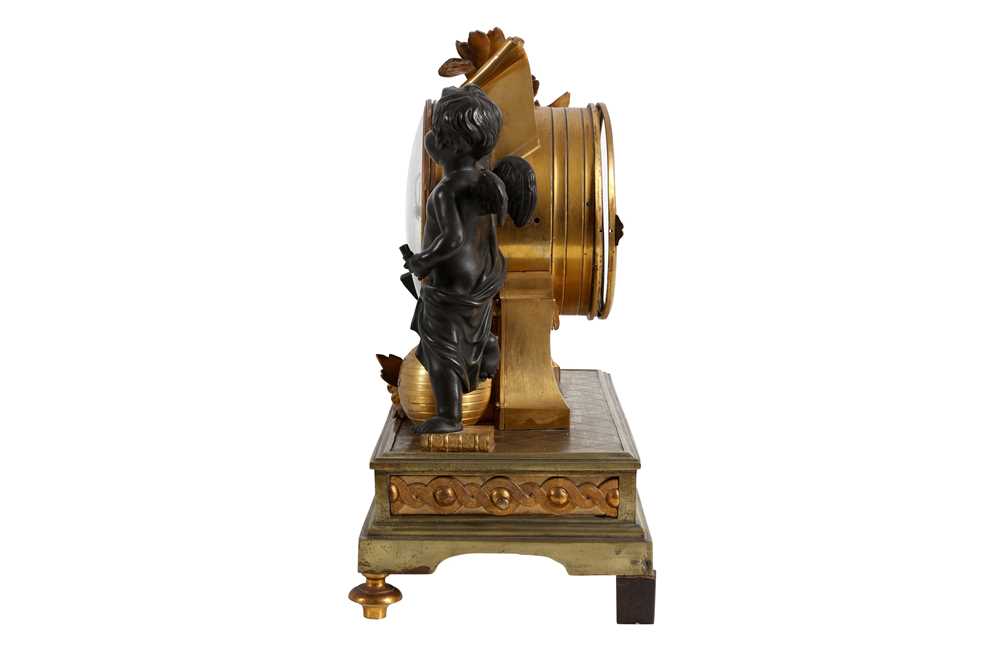 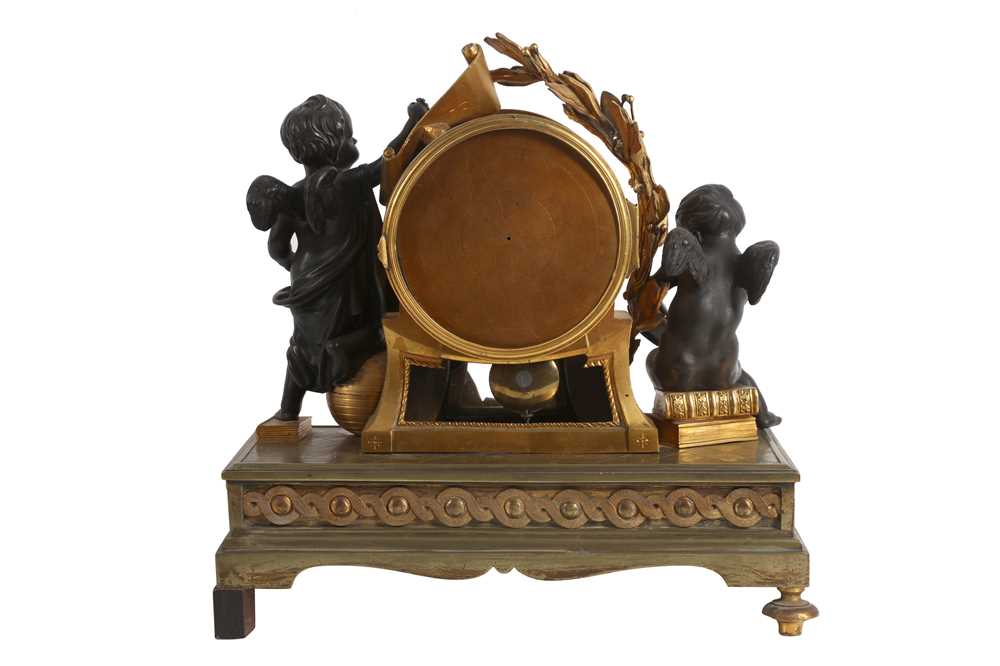 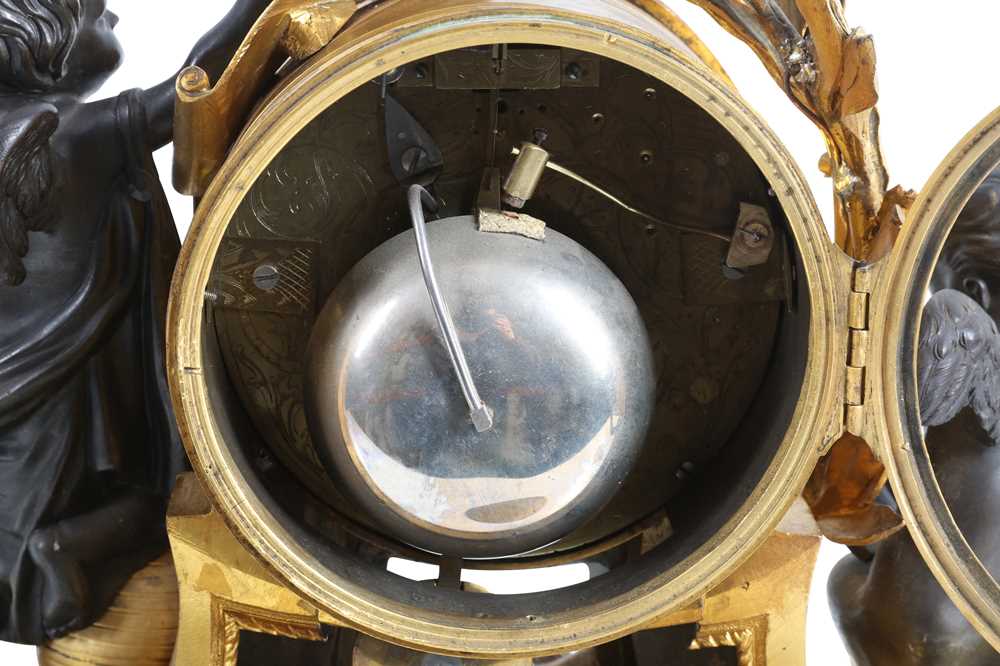 (The Collector: Objects to Clocks, 30th March 2021) A RARE AND FINE LATE 18TH CENTURY ENGLISH BRONZE AND GILT BRONZE FUSEE CLOCK BY JAMES TREGENT A RARE AND FINE LATE 18TH CENTURY ENGLISH BRONZE AND GILT BRONZE FUSEE MANTEL CLOCK BY JAMES TREGENT, LONDON, the case in the French Louis XVI style, the drum case raised on a spreading plinth fitted with a glass panel to view the swinging pendulum and raised on a rectangular plinth base of gilt bronze with guilloche style mounts, fitted with a drawer to the right side to hold the winding key, the top of the plinth chased to resemble a chequered floor, with a pair of putti either side of the clock dial, one seated on a pile of books and writing in a book with a stylus, a pot of ink at his feet, the other kneeling on a star covered globe, centred by a ribbon-tied laurel wreath, the 5.5 inch white enamelled dial with Roman numerals and Arabic five minute markers, signed 'TREGENT LONDON', with rise and fall regulation winding square to the top, the twin fusee movement striking the hours on a bell, with pendulum with rise and fall regulation, the backplate finely engraved with scrolling acanthus leaf strapwork, with pendulum winder and regulation key, 35cm high x 37cm wide The clock is winding, ticking and striking but not fully tested or guaranteed. Provenance: Probably Sir Charles Wale (1763–1845) of Little Shelford, Cambridgeshire, and thence by descent. The clock has been consigned for sale by a direct descendant of Sir Charles Wale and has certainly been in the family for at least a hundred years. A portrait of Sir Charles Wale circa 1815 is shown here. This exceptional late 18th century bronze and gilt bronze figural mantel clock is particularly rare as it was produced by an English royal clockmaker in the French Louis XVI taste. The exquisite quality of the bronze and ormolu casting and chasing to the case combined with a fusee clock movement are features that only find close comparison with that other great royal horologist, Benjamin Vulliamy. However, unlike the vast majority of Vulliamy’s bronze and gilt bronze sculptural clocks, Tregent has fitted a small twin fusee clock movement which strikes the hours on a bell into the case, rather than just a single fusee, timepiece movement. This combination of a striking, twin fusee movement and a French style bronze case is very rarely seen in English clocks of the late 18th or early 19th centuries, and could be an indication that it was made for a special commission for a patron who admired French clockmaking but required a more accurate English fusee movement. Like Vulliamy, Tregent provided clocks to the very highest members of society and royalty, including of course the Prince of Wales and the Duke of Kent. His trade card in the Banks Collection (D,2.1476) advertises "Tregent, Watch & Clock Maker, To their Royal Highnesses The Prince of Wales and Duke of Kent...". James Tregent came to London from France with his brother who was an enameller. He set up his first shop at 35 The Strand, before moving to Leicester Fields (now Leicester Square) and is recorded as free from the Clockmakers' Company from 1781 until 1808. His work is still very highly prized, with examples of his more typical wooden bracket / tables clocks in the Victoria and Albert Museum, the British Museum, the Science Museum and Guildhall Museum, London and the Metropolitan Museum of Art, New York. The following summary of the life of Charles Wale comes from the Charles Wale Memorial in All Saints parish church, Little Shelford, Cambridgeshire: "Sacred to the memory of General Sir Charles Wale KCB Colonel of HM 33rd Regiment of Foot Born 16 August 1765 Died 20 March 1845 Aged 81 Years He was the youngest son of Thomas Wale of this parish. He entered the army in 1779 and served at the siege and bombardment of Gibraltar by the French and Spaniards in 1801-1802-1803 and subsequently in Holland, Ireland & India. In February 1810 at the head of his brigade the Royal York

A FINE AND VERY RARE AND FINE TURQUOISE-

A VERY RARE AND FINE GILT AND SILVER-DEC

A RARE AND FINE GILT-BRONZE FIGURE OF A

ROLEX A RARE AND FINE 18K GOLD AND DIAMO 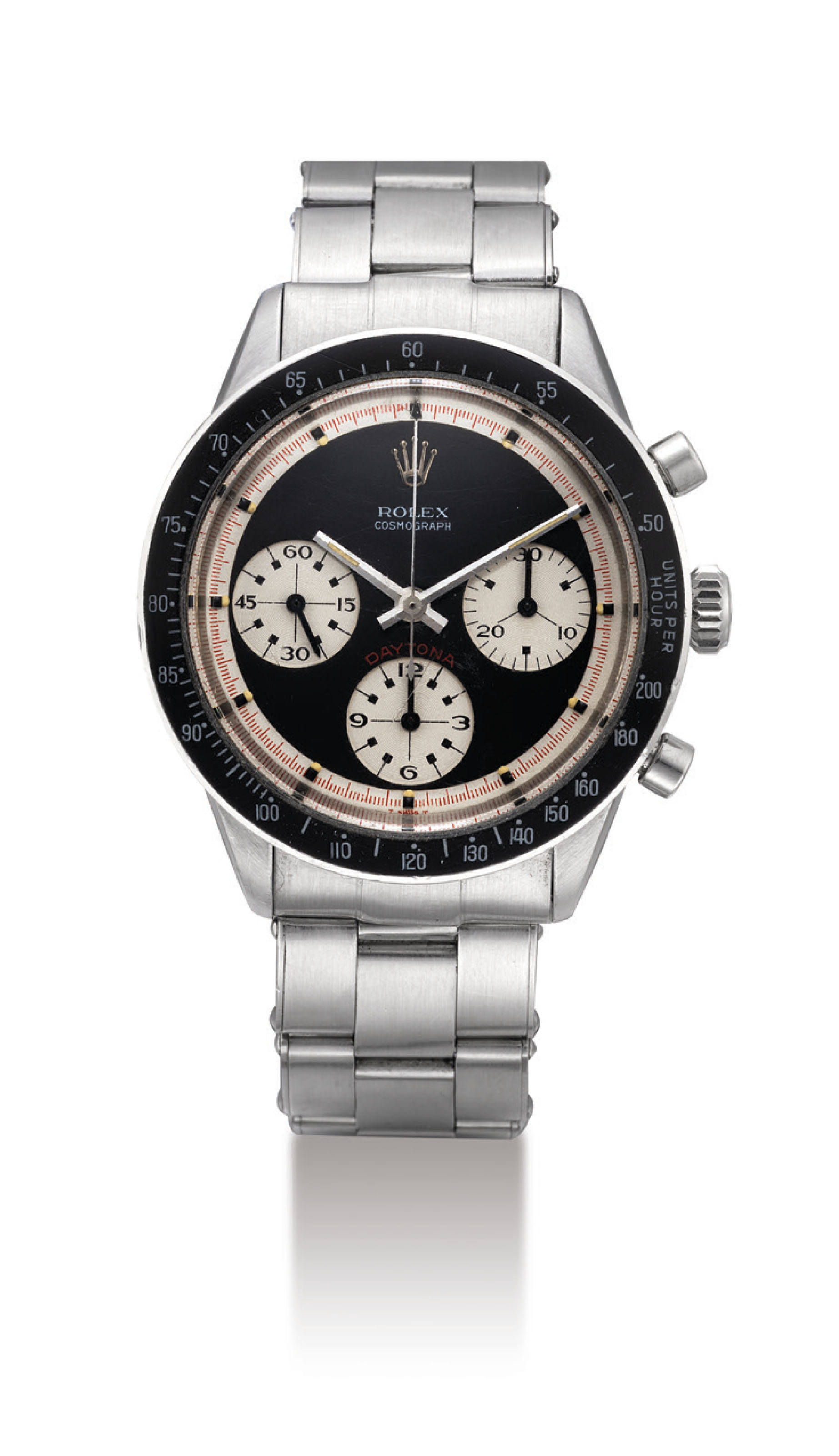 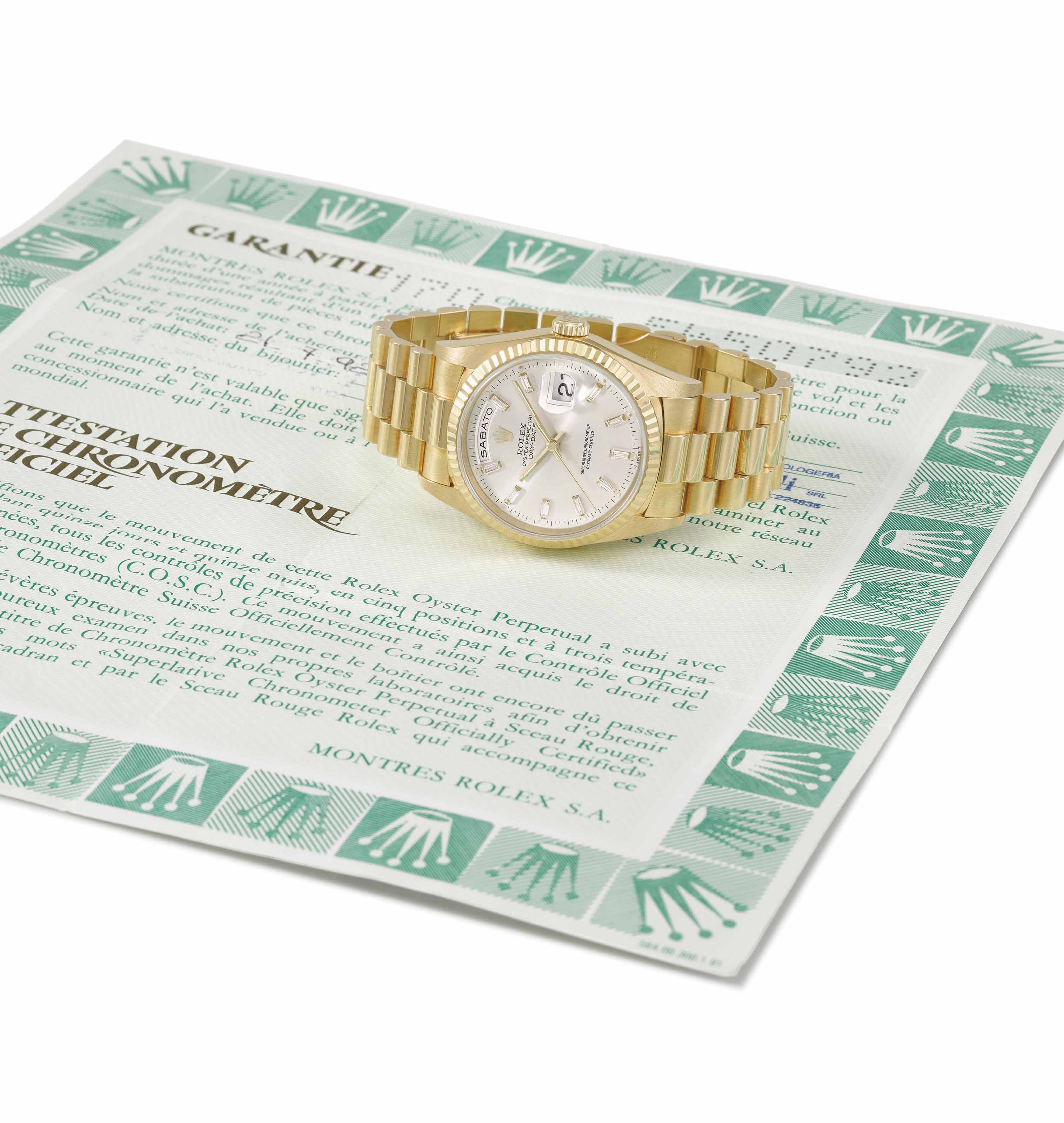 Rolex A very rare and fine 18K gold and 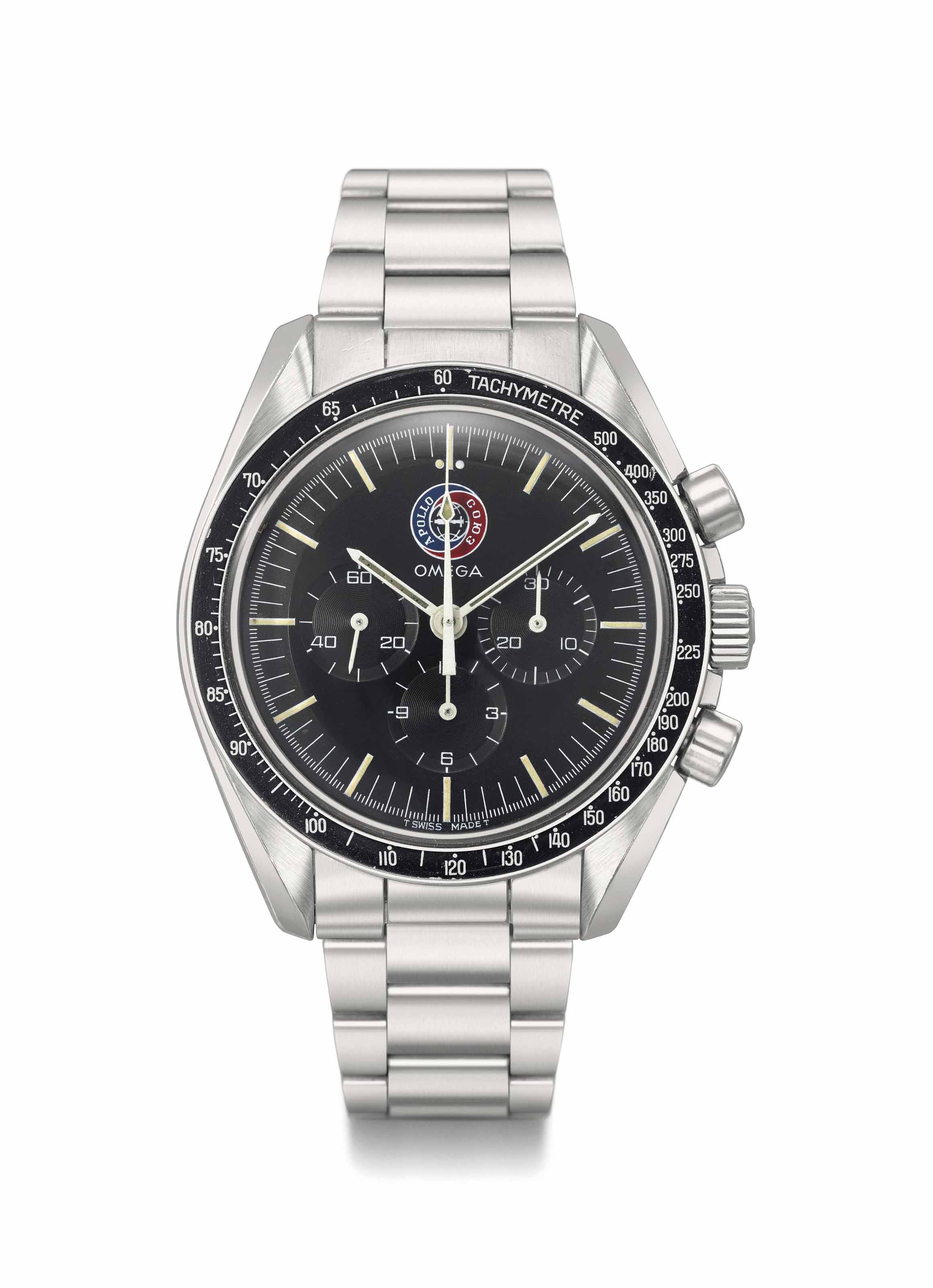