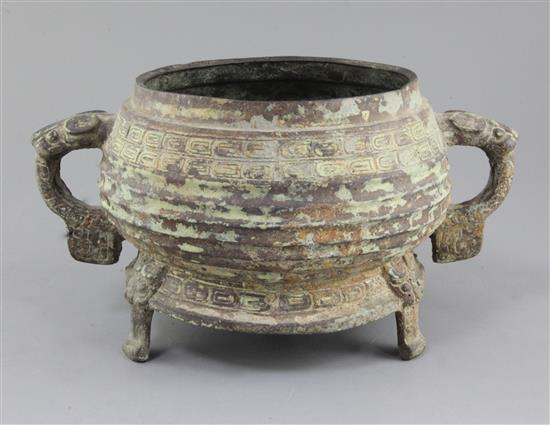 A large Chinese archaic bronze tripod ritual food vessel, Gui, late Western Zhou dynasty, 9th-8th century B.C., the ribbed body cast in relief with 'scaled' bands to the upper registers and around the base, applied with a pair of mythical beast head handles with scrollwork fin pendants, on flat out scrolled feet headed by bovine masks, 100 character inscription to the interior of the base, dark grey-brown patina with malachite and cuprite encrustation, 33.5cm wide, 18.5cm high Estimate £10,000-15,000 Literature: See Rawson, J, Chinese Bronzes: Art and Ritual, London/Sainsbury Centre for Visual Arts of East Anglia / Burrell Collection, Glasgow, BMP, 1987, p40 and 41 Fig.18 which illustrates a complete set of ritual vessels including eight similar ritual bronze gui some with and without covers, found in a hoard excavated at Shaanxi Fufeng Shaochenchun. In her book Rawson states 'Sets of ding and gui were used to indicate rank. A feudal lord was entitled to nine ding and eight gui, a high official to seven ding and six gui and lesser officials to ever-decreasing numbers down to one of each.' A similar ritual bronze gui but with a cover featuring vertical 'scaled' bands is illustrated in J.A. Pope, R.J. Gettens, J. Cahill and N. Barnard, The Freer Chinese Bronzes, Volume 1 Catalogue, Smithsonian Institution, Washington 1967, Plate 78. The shape and decoration of this bronze vessel is also similar to to the 'Shi You gui' which was shown at the exhibition "Treasures of China", Canadian Museum of Civilization in 2007. It bears an inscription commemorating King of Gong of Zhou (922-904 B.C.) giving a fifedom to Commander Shi You, ordering that he inherit the title as well as the land and people living there. Provenance: the estate of the late Jean-Claude Jean-Claude (1926-2016). Jean-Claude Lepileur was a man of great learning. Born in Lisieux in France, he became a buyer and seller of antiques and formed a partnership with Mrs Senta Christian in a joint antiques venture, travelling to and from England from their early base in Deauville in Normandy. Mr Lepileur was a self-taught historian, chemist and restorer, with a particular love of all things Asian, especially pieces of art from China. And more specifically ancient Chinese bronze artefacts, which he collected avidly all his life. Mr Lepileur and Mrs Christian moved their business to Finchley in London in the 1950s and they continued to operate as a partnership until 1996, when Mrs Christian passed away. Jean-Claude had a very discerning eye for art and at one point even managed to identify two original Rembrandt sketches for sale on a stall on Portobello Market and was able to purchase them for a few pounds. They were later fully authenticated by the Victoria and Albert Museum. Mr Lepileur was also a frequent visitor to the British Museum in those days as he was always keen to compare his latest Chinese bronze acquisitions with those in the collection of the museum. During his life he amassed a collection of some eighty bronzes and a number of ceramics, pictures and scrolls. He also collected over 60 reference books, many of them very detailed, which he used to assist him with his research. Mr Lepileur was still buying and selling up until his death in December last year, aged 90. The collection is presented complete, with no omissions and is a great tribute to his skill in identifying, researching and collecting some wonderful pieces of Chinese art. Some hard encrusted earth to underside of foot on inside edge. Some occasional minor pitting/ting holes to the surface interior and exterior and handles (please see photos). None of the holes go all the way through. Some occasional minor indentations to the rim and around the base, otherwise in good conditon consistent with age and use. 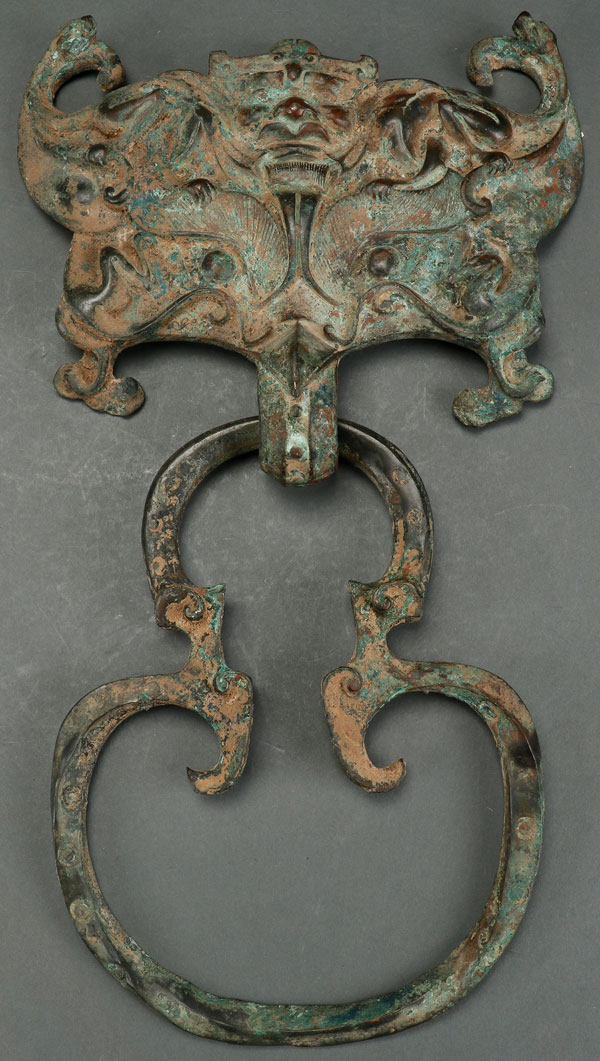 A large Chinese gold and silver inlaid b

Group of Chinese Archaic-style Glazed an