A fine Charles II brass lantern clock John Clarke Bristol, circa 1681 The posted countwheel bell-striking movement with verge escapement regulated by short bob pendulum swinging outside the frame to the rear and with alarm mechanism mounted to the lower right hand corner of the backplate within the frame, the dial with central alarm disc within stylised symmetrical foliate engraved infill incorporating a winged female mask at twelve o'clock and with pierced brass hand within applied narrow Roman numeral chapter ring with floating asterisk half hour markers, the angles engraved with signature Iohn, Clarke, in Bris, toll, with indistinct date 16..1, the typical 'Bristol' frame with one-piece column turned corner posts beneath lion and unicorn armorial engraved and pierced frets, integral multi-knopped tall vase-and-cover turned finials and domed bell bearer cast with pierced leaf decoration between the limbs, with brass side doors and backplate between hanging hoop above spurs to rear, on tall disc-knopped ball feet, 40cm (15.75ins) high. Provenance: From the estate of an esteemed antiquarian horologist, acquired at Sotheby's London, 23rd March 1999 (lot 251). Literature: The dial of the current lot is illustrated on the back cover of THE PROCEEDINGS OF THE ANTIQUARIAN HOROLOGICAL SOCIETY, THE OXFORD 2000 CONVENTION held at Keble College, Oxford, 15th and 16th April 2000 where the clock was also exhibited. John Clarke is recorded in Moore, A.J. CLOCKMAKERS OF BRISTOL 1650-1900 as son of John Clarke a Hooper of Bristol, who was apprenticed to Solomon Wasson in 1743 becoming a Burgess on 3rd February 1650. Clarke is recorded as residing at 6 Wine Street in 1656 and later (1675) as working at the top of Broad Street (in the Parish of Christchurch). A fine watch by Clarke resides in the British Museum's Collection (Octavius Morgan bequest). In addition to the current lot it seems that there may be only one other lantern clock by John Clarke known to have survived: Clock dated 1679 illustrated in White, George, English Lantern Clocks on page 227 (Figure V/28). Another Clock, dated 1681, is also noted (but not illustrated) by White (on page 225) and again in Loomes, Brian Clockmakers of Britain 1286-1700 (on page 120), it is probable that both these records relate to the current lot as the now indistinct date most likely originally read '1681'. The current lot utilises frame castings that were favoured by the Bristol and Chew Valley school of clockmakers with the earliest surviving dated example made by Edward Webb of Chew Stoke in 1676 (private collection). Several other clocks by Webb are known with dates ranging from 1678-93, with all of the documented examples sharing the same frame castings. These castings were also used by John London of Bristol, Thomas Veale of Chew Magna (see previous lot) and latterly by Edward Bilbie of Chew Stoke (who is believed to have succeeded Edward Webb in around 1695). Bilbie appears to have persisted with the use of such castings long after Bristol makers had moved onto patterns more closely related to London work of the period, suggesting that such frames were probably cast locally (in the Chew Valley) - perhaps initially by Edward Webb at his foundry in Chew Stoke then by the Bilbie family after Webb's death in 1694. Another noteworthy detail is the distinctive dial engraving which is executed with scrolling foliage issuing from a central point at the base of the dial centre, continuing symmetrically around the alarm disc and terminating with a central winged female mask motif at the top. The design of this decoration appears to have its roots in the work of Thomas Brown of Bristol who was most active during the 1650's (see White, George English Lantern Clocks page 232) and can be very closely compared to the 1676 clock by Edward Webb of Chew Stoke - suggesting that both clocks were engraved by the same hand. The placing of the signature within the areas at each corner beyond the chapter ring is 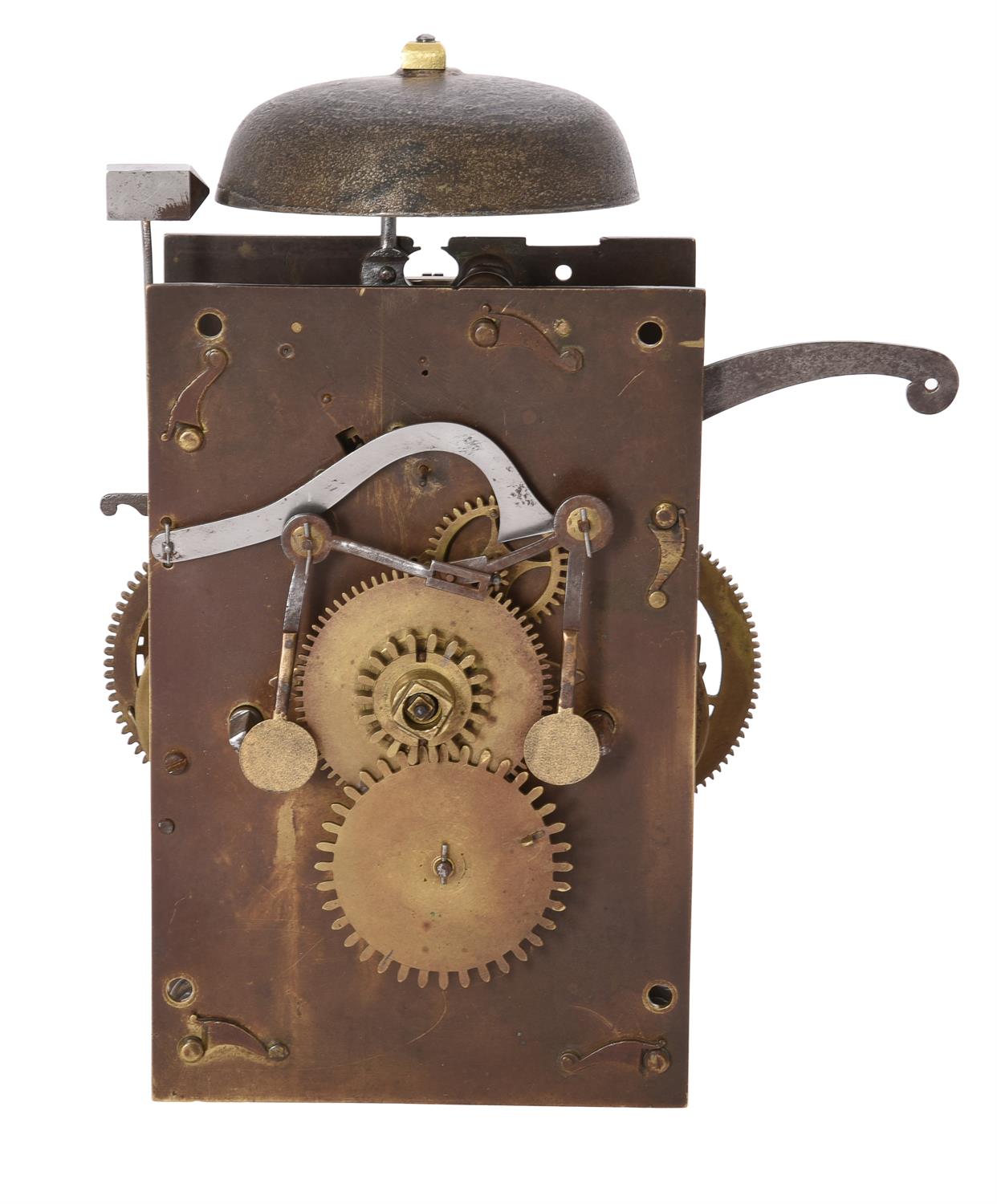 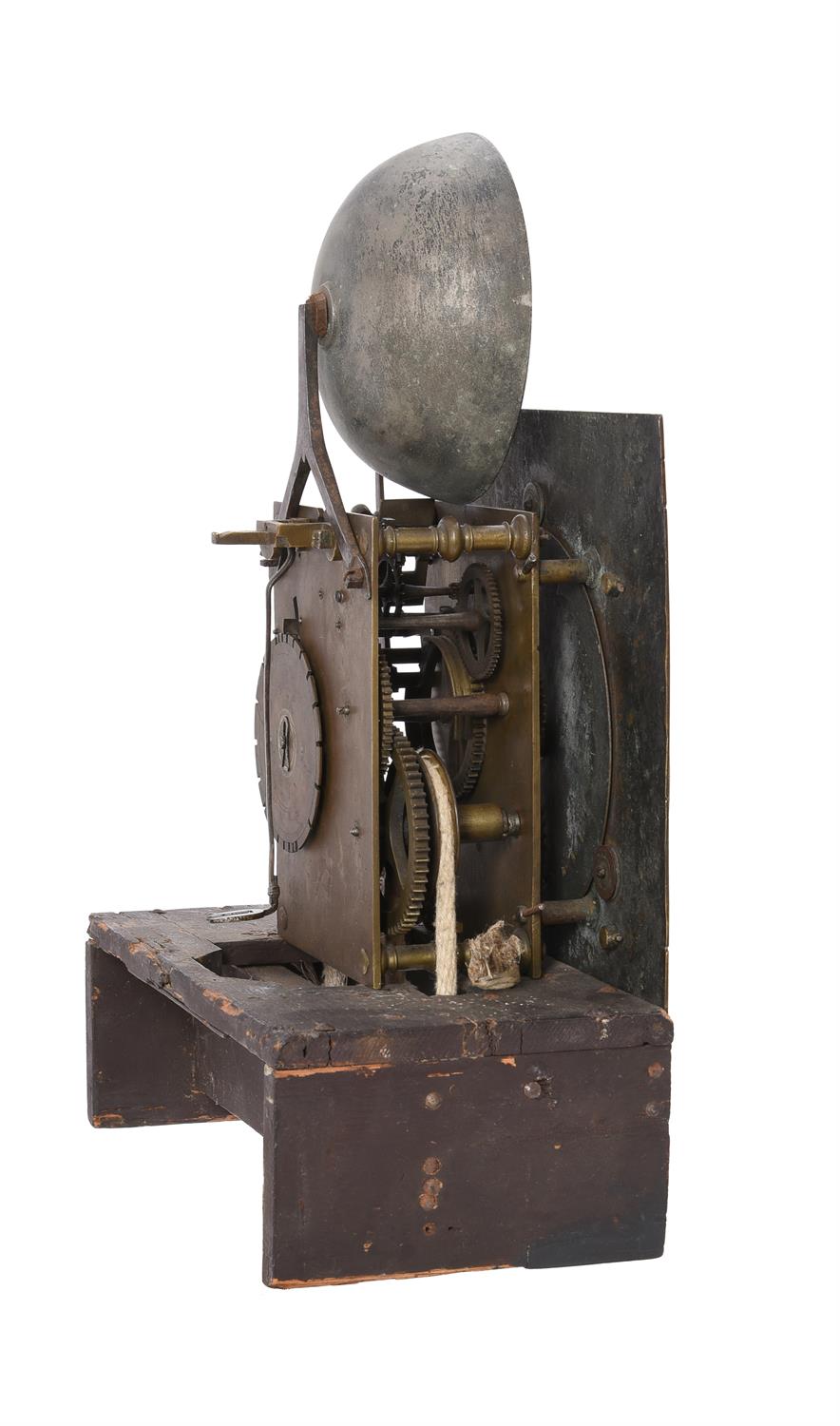