A CONG-SHAPED BEAD WITH MASK MOTIFS AND ADDITIONAL SPIRALLING PATTERNS

A CONG-SHAPED BEAD WITH MASK MOTIFS AND ADDITIONAL SPIRALLING PATTERNS Katalognummer: JAK0318-008 Jade China Late Neolithic period, Liangzhu culture, c. 3300-2200 BC 獸面紋琮形玉墜 - 新石器時代晚期,良渚文化, 約公元前3300-2200年 LENGTH 7.5 CM 長 7.5 厘米 This bead is shaped like a mini 3-tiered cong and decorated with the usual mask motifs that are typical of Liangzhu jades. The register in the middle is carved with a shoumian or animal-type of mask, with large eyes joined by a ridge and a mouth, all filled with tiny incised lines and spirals. Instead, the other two registers at the top and at the bottom are decorated with a stylized anthropomorphic face. The bead is drilled throughout, and the jade, of varying shades of brown with reddish areas, is smoothly polished, even in the whitish areas where calcification is present. Though beads of this kind are relatively common in Liangzhu culture finds, this one stands out because of the presence of the additional motifs –spirals, double-incised lines- that are used to further embellish the stylized masks. Liangzhu beads with a square cross-section shaped as miniature cong, as the present lot, have come to light mostly from sites in Jiangsu province, such as Caoxieshan, Wu county; Fuquanshan, Qingpu county, Shanghai; and Sidun, Wujin, Changzhou: see Zhejiang institute of cultural relics and archaeology, Liangzhu wenhua yuqi 良渚文 化玉器 (Jades of the Liangzhu culture), Beijing 1990, nos.70 and 175-177, and Huang Xuanpei, Gems of the Liangzhu Culture from the Shanghai Museum, Hong Kong 1992, no.69. Compare also a similar bead published in F. Salviati, 4000 Years of Chinese Archaic Jades, Edition Zacke, Vienna 2017, no.69. Startpreis 起始價: € 2.200 Schätzpreis 估計/估算: € 4.400 Expertise: Prof. Filippo Salviati From an Austrian collection All jades in this catalogue have been professionally examined, authenticated and described by Prof. Filippo Salviati. Professor Salviati teaches Chinese and Korean art at Sapienza University in Rome, in the Italian Institute of Oriental Studies. He is a world expert on archaic Chinese jades, having released multiple publications and being cited by renowned auction houses such as Sotheby’s. The microscopic images made available here, show that the weathering of the jade has occurred over a long period of time. Furthermore in the magnification one can reconstruct the workings of the jade. The two aforementioned criteria are exactly what counts in the authentication of archaic jades – the difficult and elaborate workmanship by hand and the subsequent weathering of the jade over centuries. The microscopic enlargements show how the patterns were ground out in many small steps, sometimes over months, and that the weathering actually occurs above the carvings, meaning it occurred after the jade was completed.

A CONG-SHAPED BEAD IN WHITENED JADE WITH 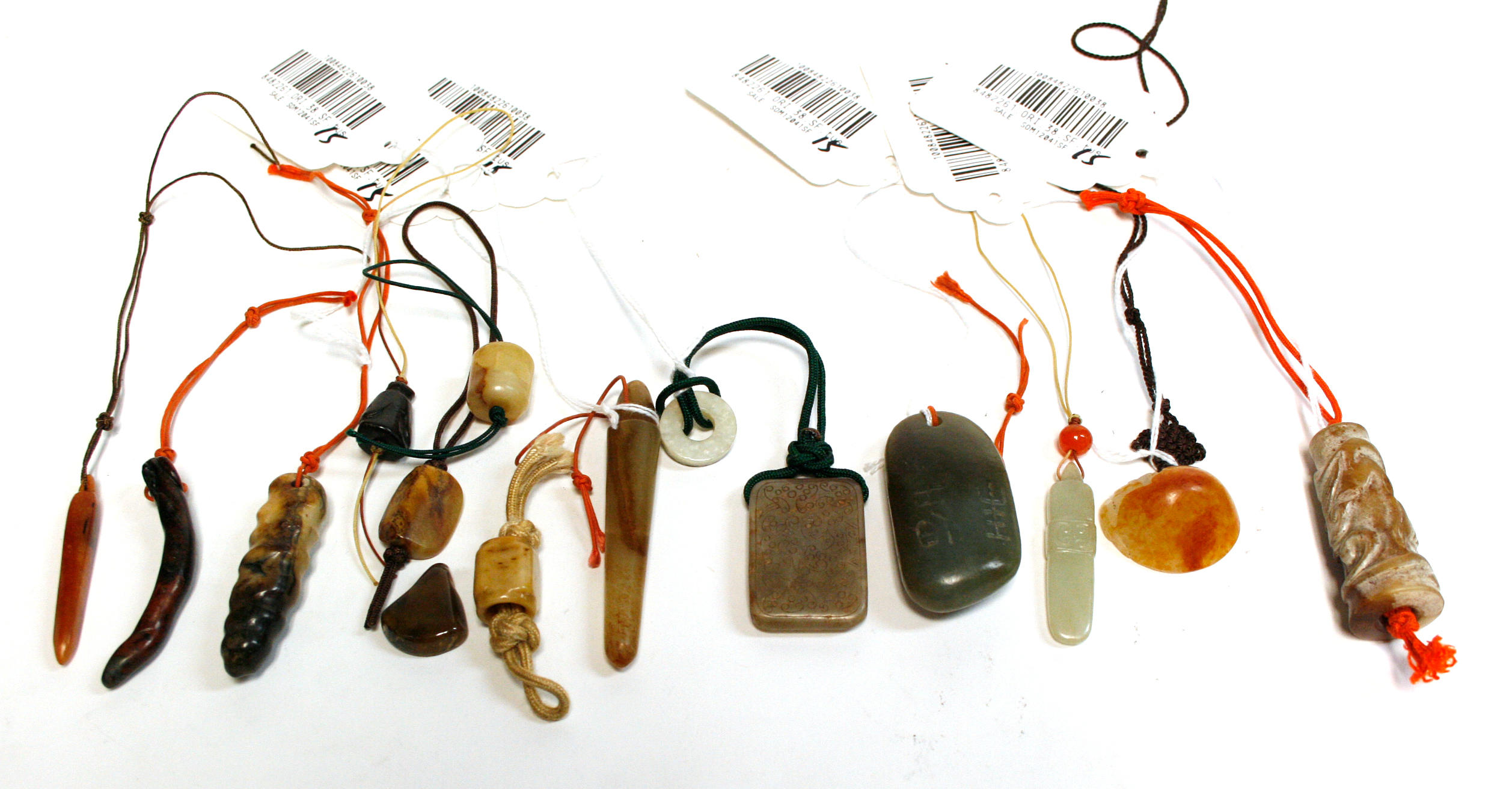 A group of fifteen miniature jade and ha 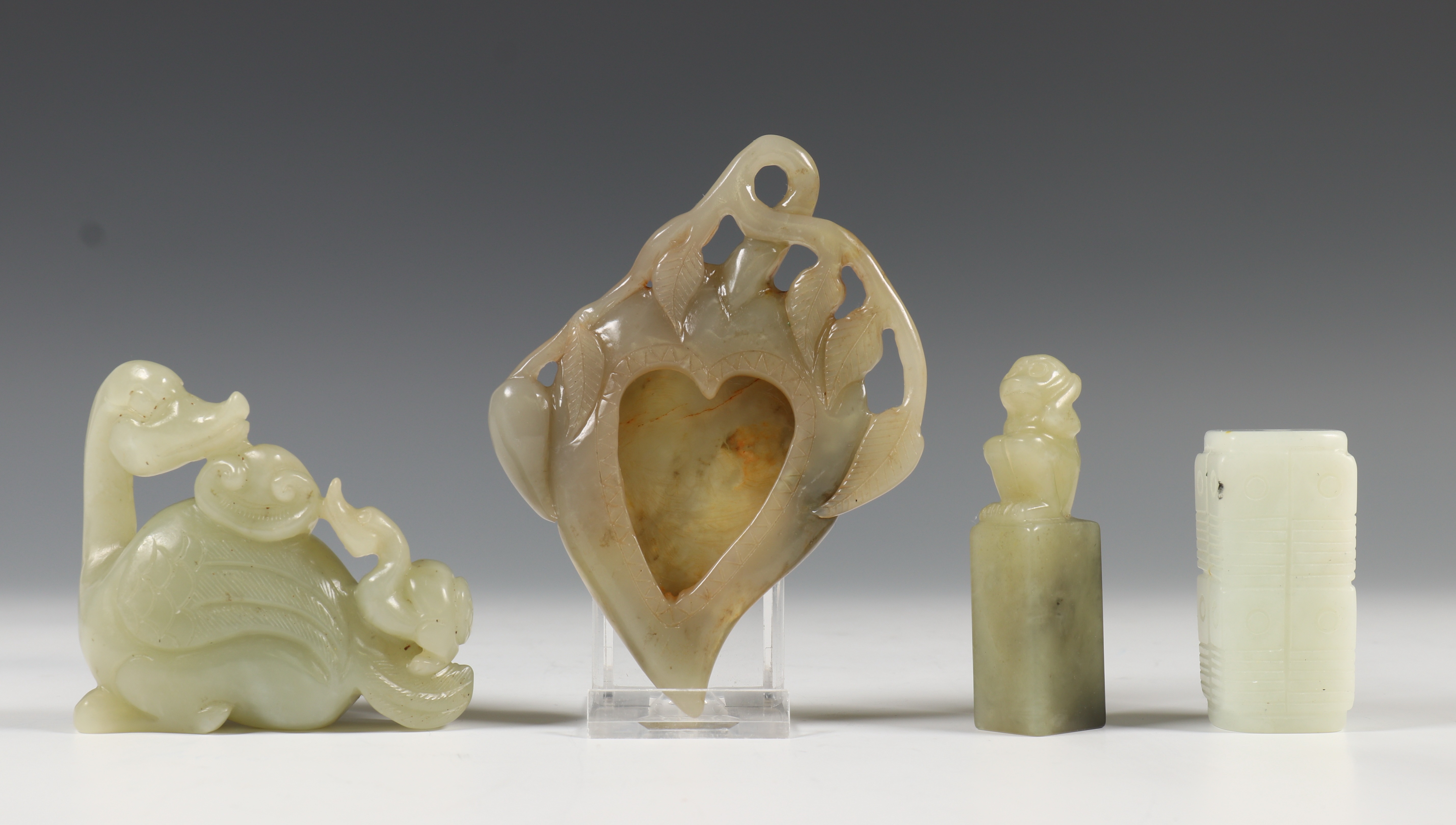 A jade and an agate cong shaped bead, th

A FINE JADE BEAD IN THE SHAPE OF A MINIA