A Chinese Blanc de Chine figure of Guanyin, 17th century, seated, with the left hand resting on the left one, the right holding a scroll, wearing voluminous robes, wearing elaborate jewellery, heir hair tied in a high chignon covered with a long veil sweeping over her shoulders, cold painted at later times with gilded, red and black pigments, 18cm high 清十七世纪 德化白瓷观音坐像 Blanc de Chine figures of Guanyin, often enhanced with unfired decoration in the bold strong colours favoured at this period, became an essential part of the decoration of royal and princely baroque porcelain cabinets across Europe from Italy, Germany, Denmark and England from the eighteenth century. Being unfired, this decoration has usually degraded and been rubbed off and is generally only seen in the early collections that have remained relatively untouched, such as those of the Porzellansammlung in the Zwinger in Dresden, Arnstadt, the Pitti Palace in Florence and at Rosenborg Castle in Copenhagen. Cold painted figures of Guanyin, in fact, already appear in the inventories of Rosenborg Castle in Denmark and Schloss Favorite in Germany in the late 17th century, and those of the Danish royal collection as early as 1690. In Italy, a group of similarly coloured pieces is part of the collection of the Pitti Palace in Florence, brought by the Electress Palatine after she was widowed and returned from Dusseldorf. According to literary records, she instructed the court artist Foggini to decorate Bland de Chine figures with the help of a local artist to decorate them in 1721. Augustus the Strong was also acquiring example for the Japanese Palace in Dresden around 1720. For reference on cold painted Blanc de Chine see Ayers and Kerr, 2013, Blanc de Chine: History and Connoisseurship Reviewed, p. 54-55. Comparable examples can be found in S. Marchant & Son, Blanc de Chine, 1994, p. 74, no. 119 as well as in the Peabody Essex and Drottingholm Museums. Condition report disclaimer

A CHINESE BLANC-DE-CHINE JAR AND COVER A

A collection of Chinese blanc-de-chine a 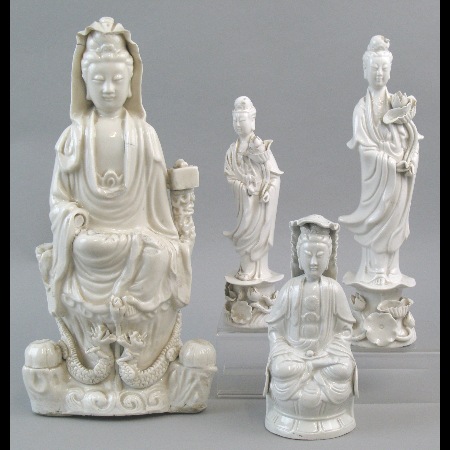 A Böttger blanc de Chine beaker and a Ch

A CHINESE BLANC DE CHINE MODEL OF A SEAT A Chinese blanc de chine model of a fema

A PAIR OF CHINESE BLANC-DE-CHINE BUDDHIS