1915 Cracker Jack Baseball Card Complete Set of (176) In Original Cracker Jack Album The Gill Collection - 1915 Cracker Jack Baseball Cards As an eleven year-old in Kingston, Ontario, Canada in 1914, young Ernie Gill pulled his first few Cracker Jack cards out of boxes of his favorite caramel coated popcorn treat. As with many young boys of the period who nurtured both a sweet tooth and love of baseball, he was captivated. The next year, inspired by the offer printed on the back of each card, he scraped together the requisite 25 cents to mail away for the entire 1915 set of Cracker Jack baseball cards and the additional 10 cents for the "Handsome Album" to keep them in. A keen collector, he carefully recorded the name and card number of each player in the album beneath their card. The set stayed with Ernie through several moves through the years, including his first move from Kingston to a boarding house in Toronto in the early 1920s. After graduating from Queen's University in Kingston, a gold medalist in mathematics, Ernest moved to Toronto to work for the Canada Life Assurance Company and to write his actuarial exams. He eventually became CEO and Chairman of the Board of Canada Life. In his spare time, he maintained his boyhood interest in baseball, playing the same position of catcher for Canada Life in the insurance league in Toronto that he had for the local Kingston area league teams of his youth. In the late 1980s, Ernie's cards came to light again with his final move and were subsequently passed down first to his daughter, Mary Byers, and then to his grandson, Christopher Byers, in whose care they have remained until being offered here publicly for the first time. The Cracker Jack baseball card series of 1914 and 1915 are the most popular caramel cards ever produced. Accurate player depictions replicated from photographic images set against a brilliant red background is the hallmark of the series. Their timeless design and ideal player selection has made the issue a favorite among collectors since the earliest beginnings of the hobby of card collecting. In 1914, cards from the series could only be obtained as inserted "surprises", one per every box of Cracker Jack. As a result, most of the Cracker Jack cards retrieved from boxes were already affected by some degree of staining even prior to being subjected to handling by sticky fingered children. The same one per box distribution method was employed in 1915, however, the newly established redemption offer for a complete set, gave ambitious kids like Ernie Gill the opportunity to get a complete series of 176 pristine cards that never had to be subjected to contact with the caramel coated product. This complete set of (176) 1915 Cracker Jack Baseball cards appears in predominantly the same uncirculated condition in which it was received and placed in its paper album by Ernie Gill in 1915. The whiteness of the white borders and redness of the red backgrounds are as vibrant as if time stood still. Typical of the issue, centering varies somewhat throughout, but is better than average overall. It is important to note, that the album was designed to secure the cards on its pages through paper corner mounts (tabs) and no adhesives have been utilized. The cards were inserted in two different ways, one way in which the corners of a card were slid behind the tabs, showing the corner tips. The other way was to insert the cards over the corner tabs, hiding the corner tips. In many cases, mostly when the corners were slid behind the tabs, faint marks and even line impressions appear on the cards. A more complete technical description of this set is available online. It is our pleasure to offer this heirloom on behalf of the family of the late Ernest Clark Gill (1903-1992). 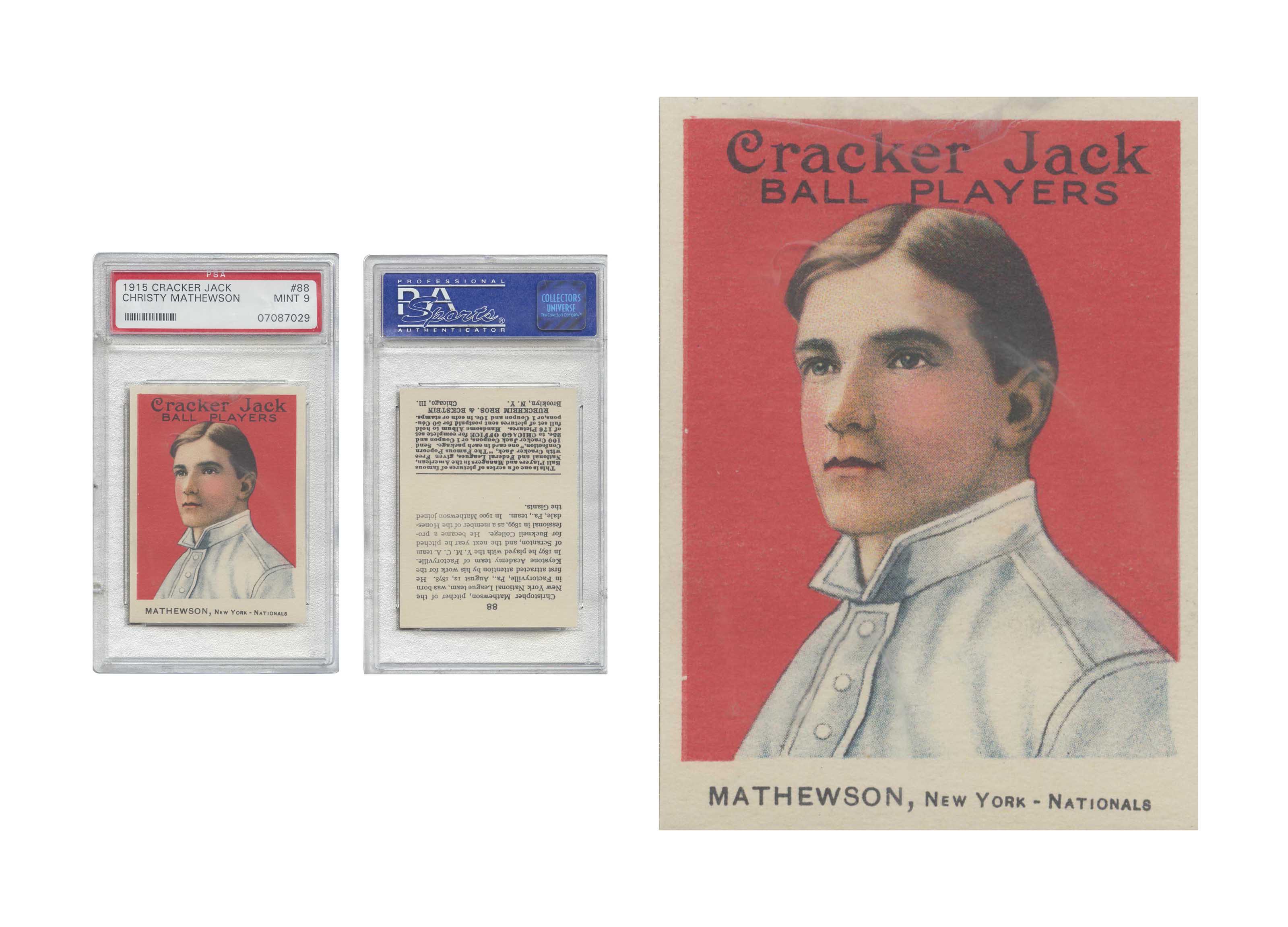 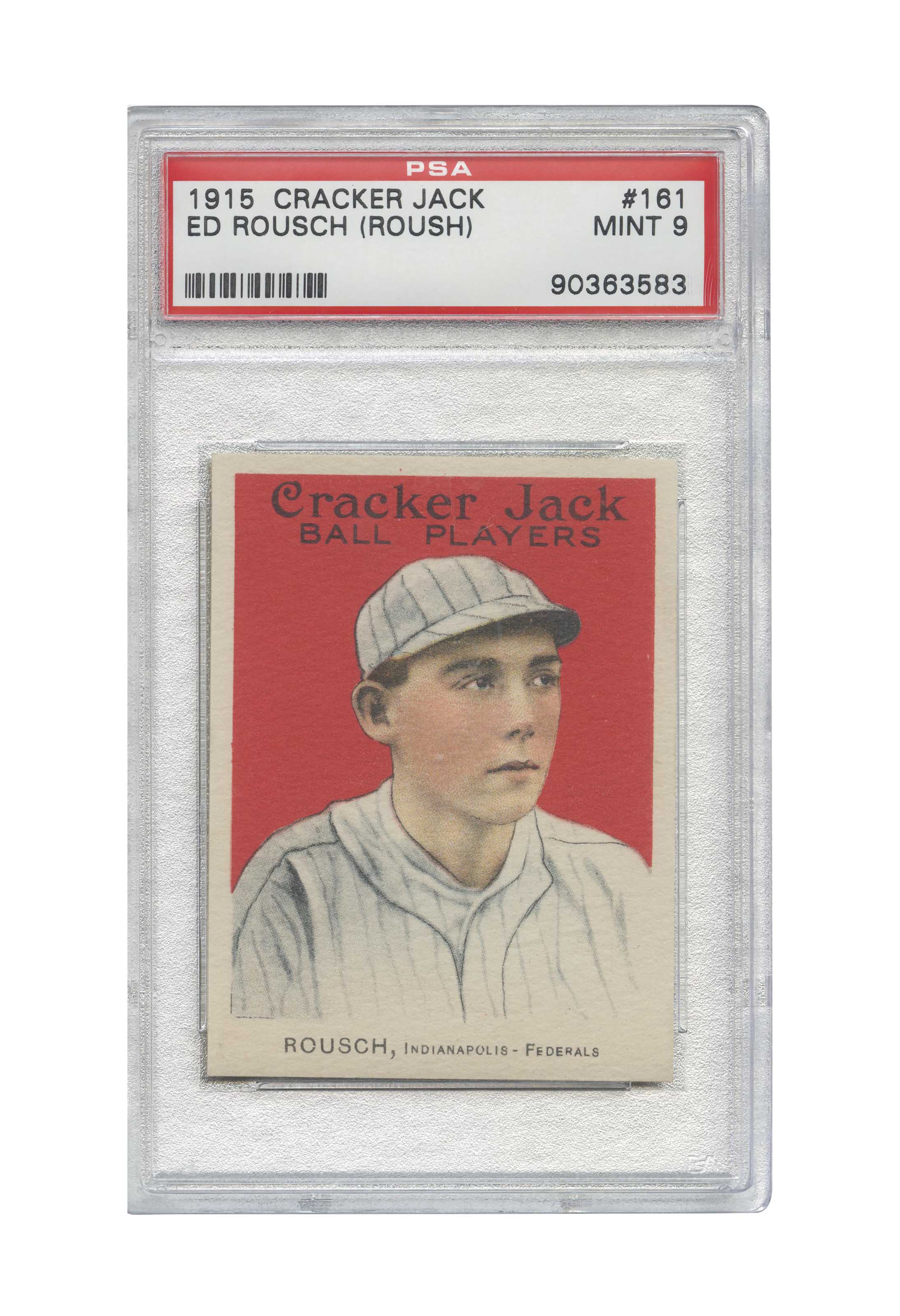