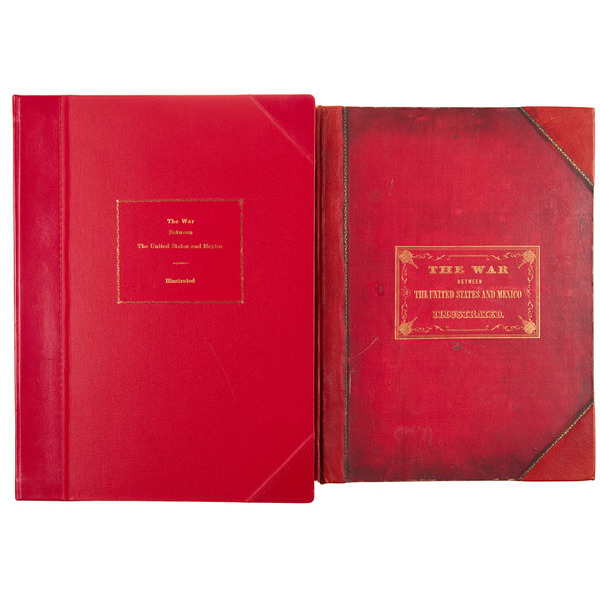 George Wilkins Kendall, The War Between the United States and Mexico...

Kendall, George Wilkins. The War between the United States and Mexico Illustrated, Embracing Pictorial Drawings of all the Principal Conflicts by Carl Nebel, author of "Picturesque and Archaeological Voyage in Mexico," with a Description of each Battle. New York: D. Appleton & Company and 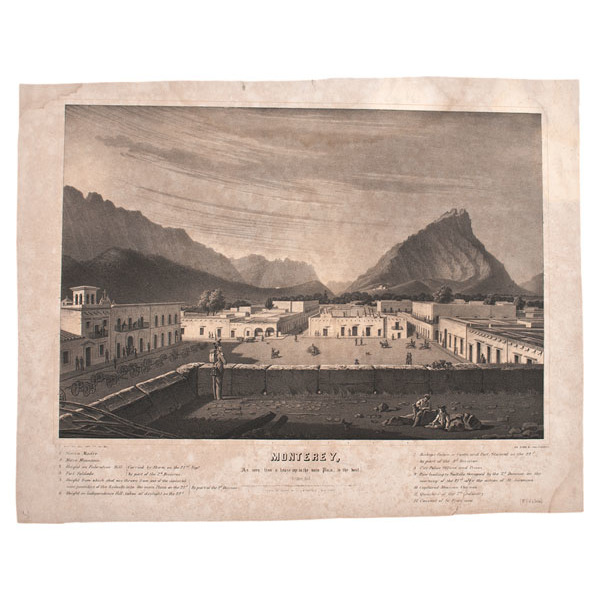 Lot of 4 lithographs by Daniel Powers Whiting, each Lith. and Printed in Colors by G. & W. Endicott, N. York / Entered according to act of Congress in the year 1847, as printed below image and printed title, and marked lower left, below image, D.P. Whiting Capt. 7th Inf. Del. The following titles 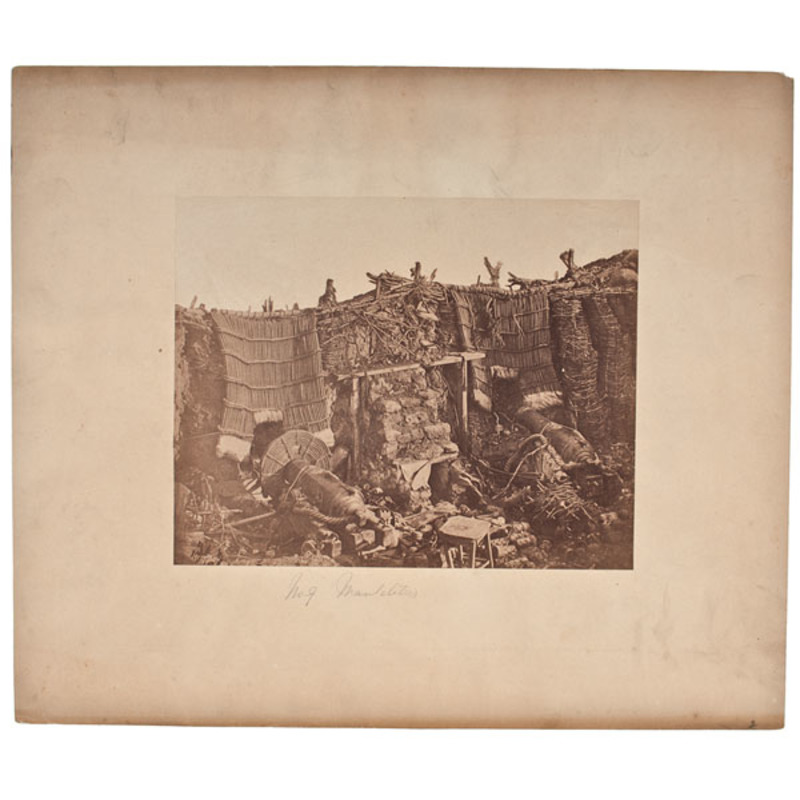 Ca 1855 salted paper print, 8.75 x 11 in., mounted, 15.75 x 18.5 in. The photograph was produced by pioneering war photographer Roger Fenton (1819-1869), showing the interior of the Russian fortifications at Sevastopol, called the "Great Redan," after their capture by French and British troops in 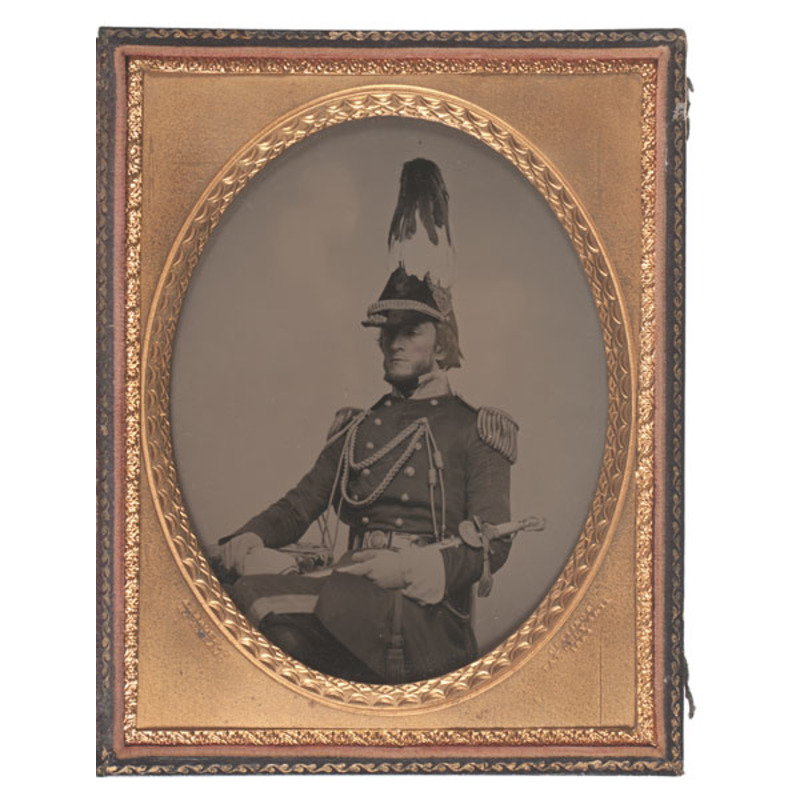 Half Plate Ambrotye of a Militia Officer, by Rufus Adams

Late 1850s, half plate ambrotype of an unidentified, high-ranking militia officer, who could be any rank from captain to colonel based on the wire bullion epaulettes, which were dropped from Regular Army regulations in 1851 but retained by militia. The officer wears a ca 1840-pattern chapeaux topped 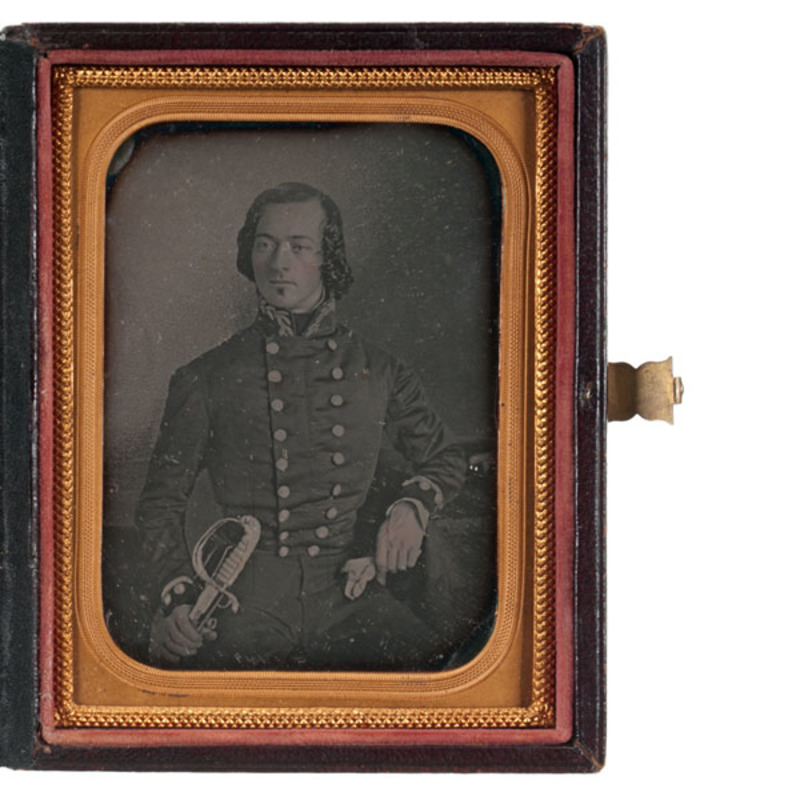 Quarter plate daguerreotype of a handsome, unidentified officer wearing an undress double breasted coatee with two rows of nine buttons. He holds a typical 1827 Pattern Royal Navy Officer's sword with lion head pommel in his right hand and a pair of white gloves in the other. The combination of cuff 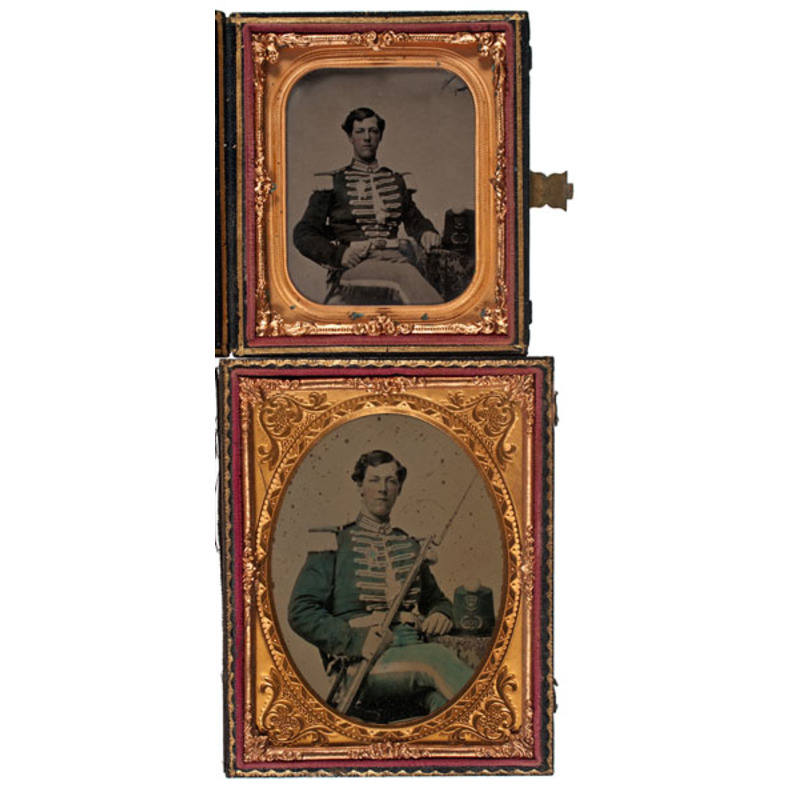 Lot of 2, including quarter plate ambrotype and sixth plate tintype of a fresh-faced militia private, taken during the same sitting. Seated in full uniform, the young private wears a silk, patriotic cockade on his chest and a US belt plate. The M1851 shako, placed on the table beside him, features a 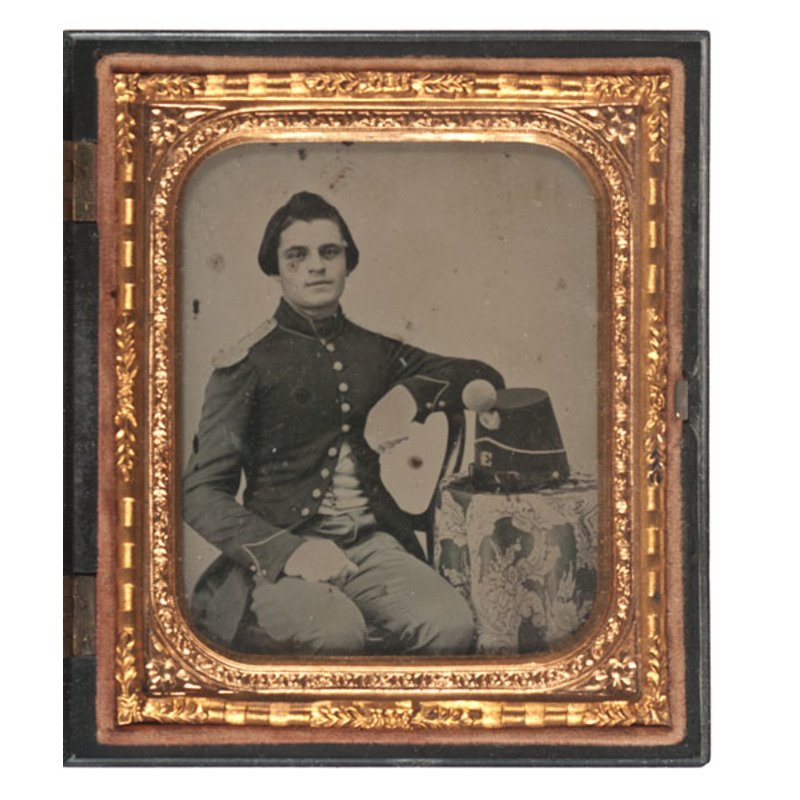 Sixth Plate Ambrotype of a Soldier Posed with his Shako

Sixth plate ambrotype of an unidentified soldier wearing a 9-button frock coat with brass shoulder scales, which was favored by New England regiments. The young soldier rests his left elbow on an 1851-pattern dress cap with pompon, marked with the letter E, which is placed on the small table beside 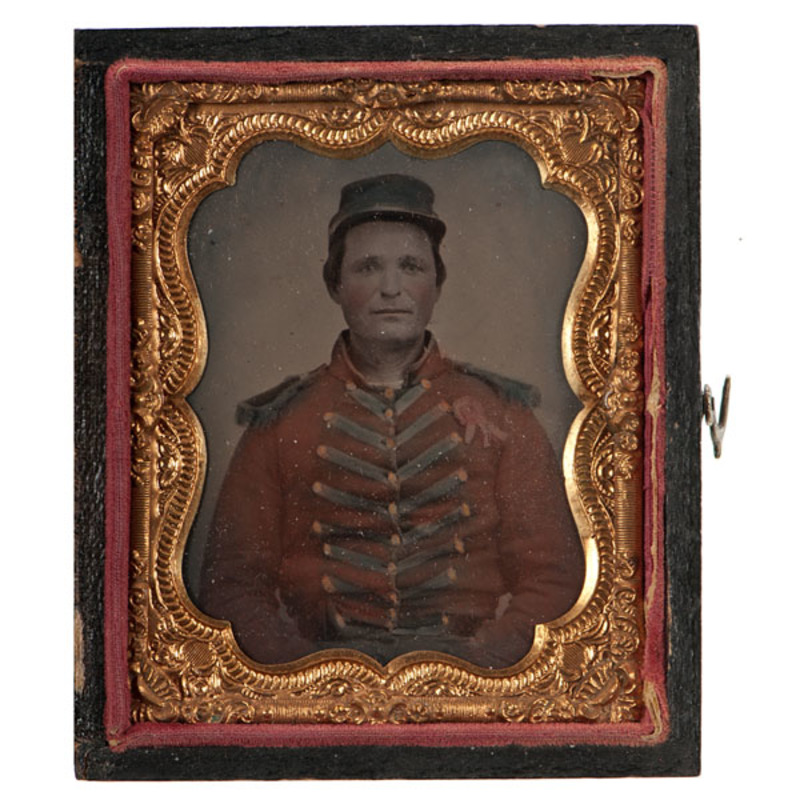 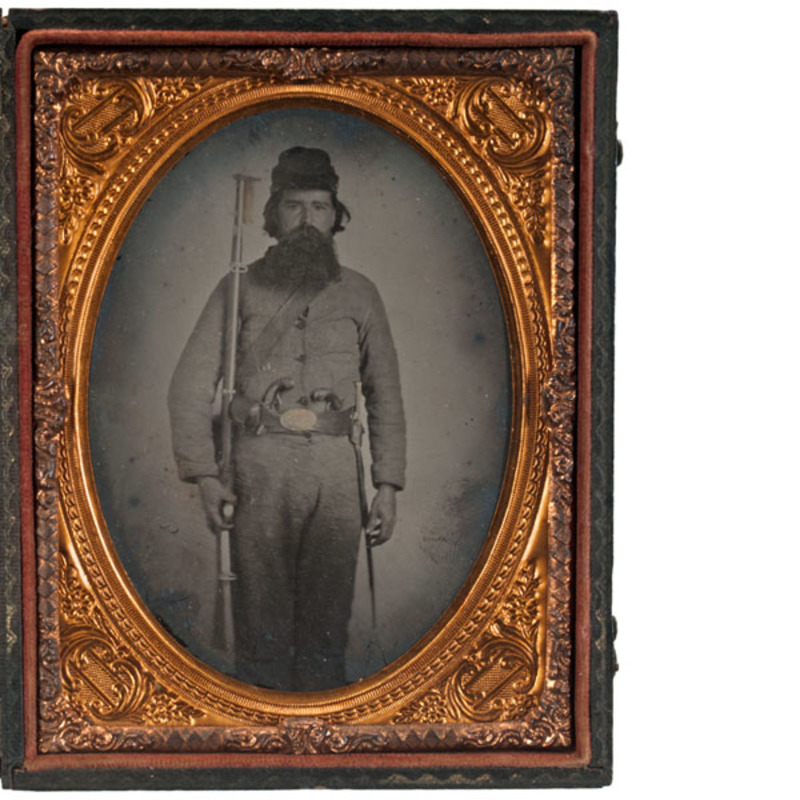 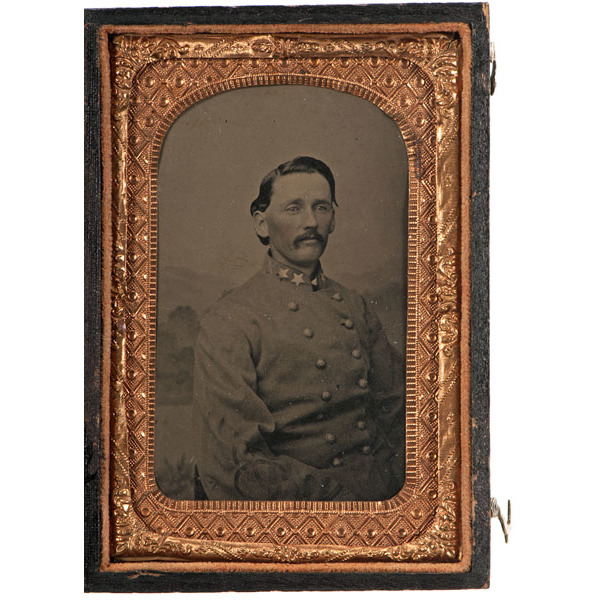 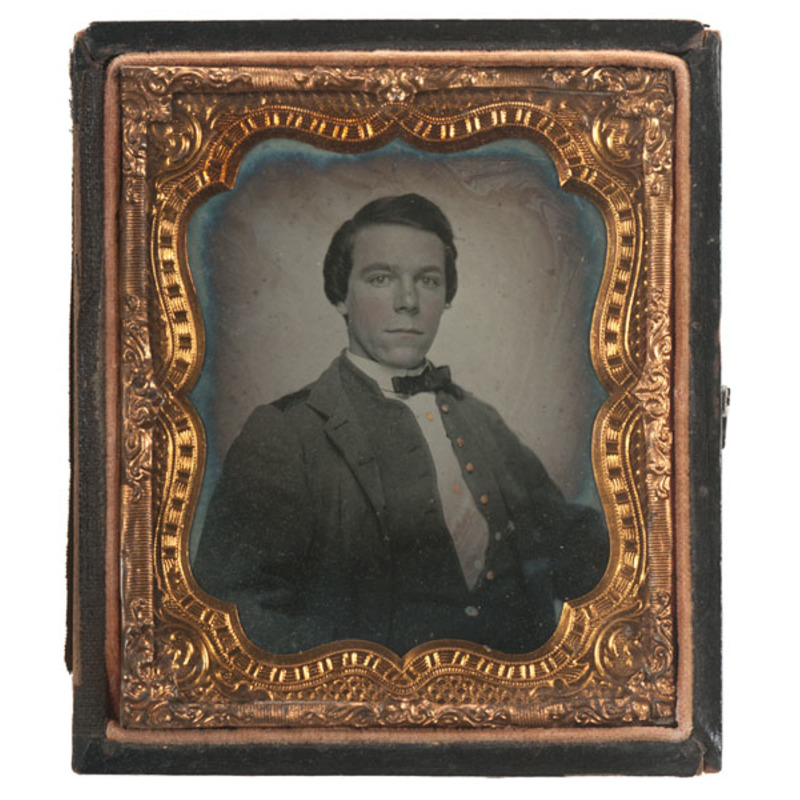 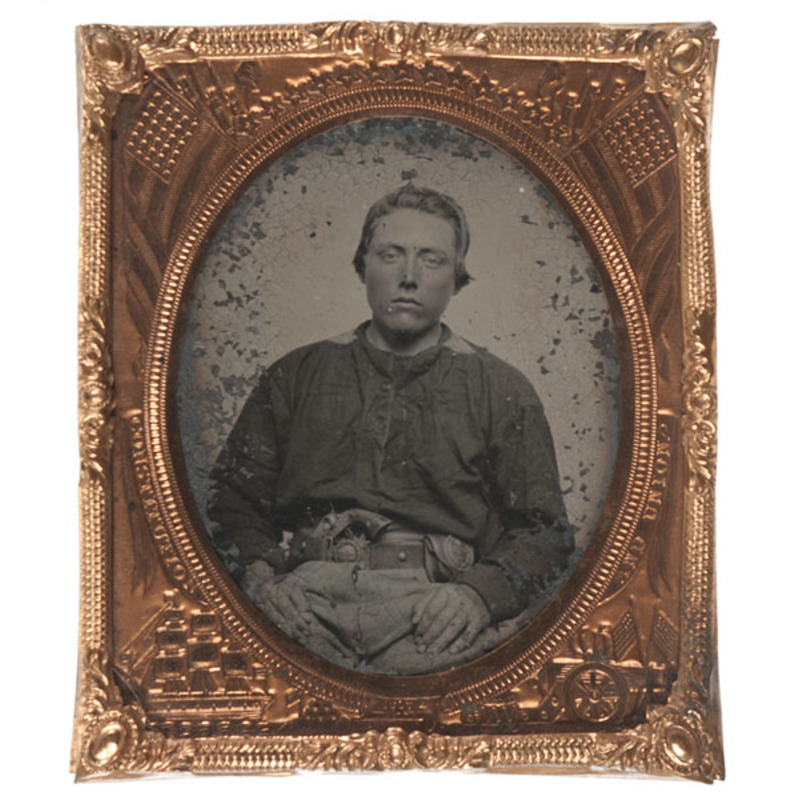 Sixth plate tintype of a soldier with a sober expression, his cheeks lightly tinted pink, wearing a CS belt plate as well as a cap box with an indistinguishable plate. A Bacon Arms Co. pocket percussion revolver is tucked in the young soldier's belt. Housed under glass and patriotic mat, but lacking 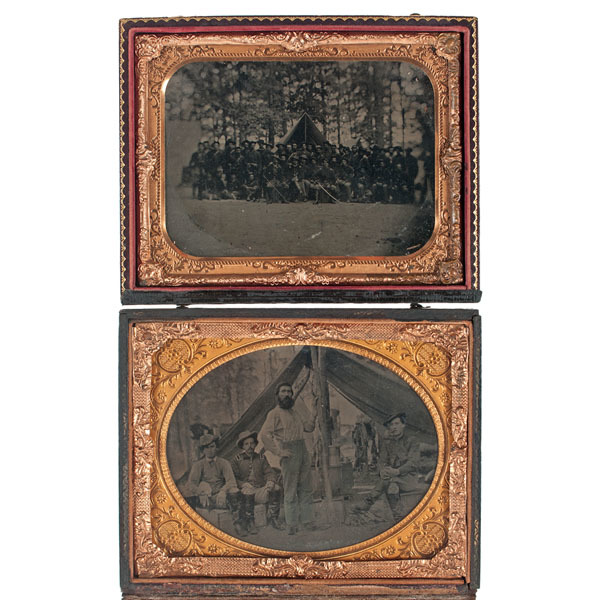 An outstanding pair of related outdoor, half plate tintypes that originated at a house sale in Indianapolis some twenty-five years ago, attributed as members of the 9th Indiana Cavalry initially commanded by Colonel George W. Jackson and later the iconic pharmaceutical magnate, Colonel Eli Lilly 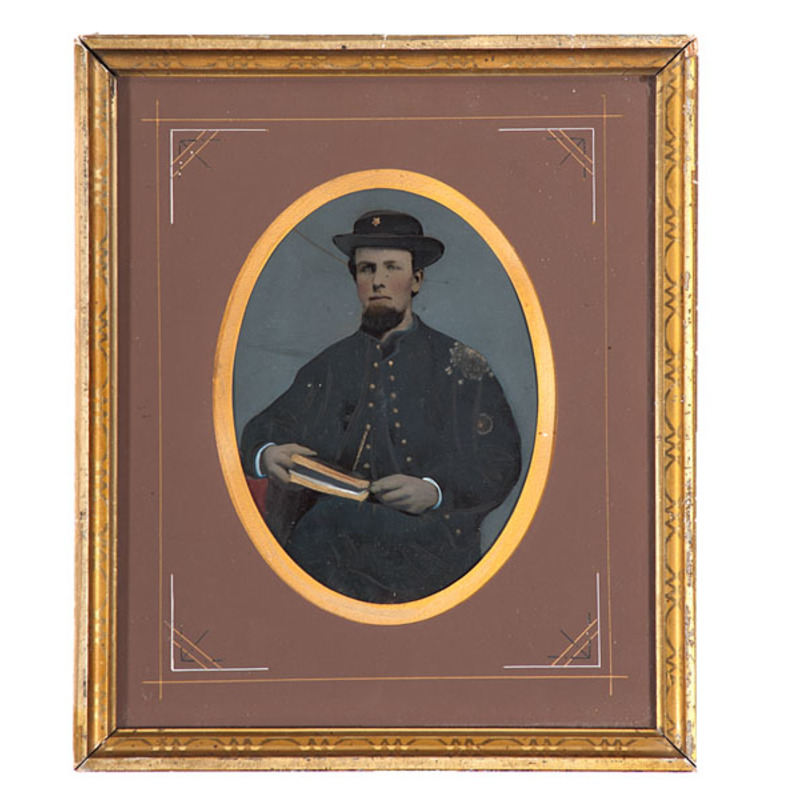 Lot of 14 items belonging to Corporal Clarkson Beebe Strickland, member of Co. B, 41st Ohio Volunteer Infantry. In August of 1861, after enlisting as a Private at the age of 20, Strickland was mustered into Co. B of the 41st OVI. Initially under the command of Colonel William Babcock Hazen and often 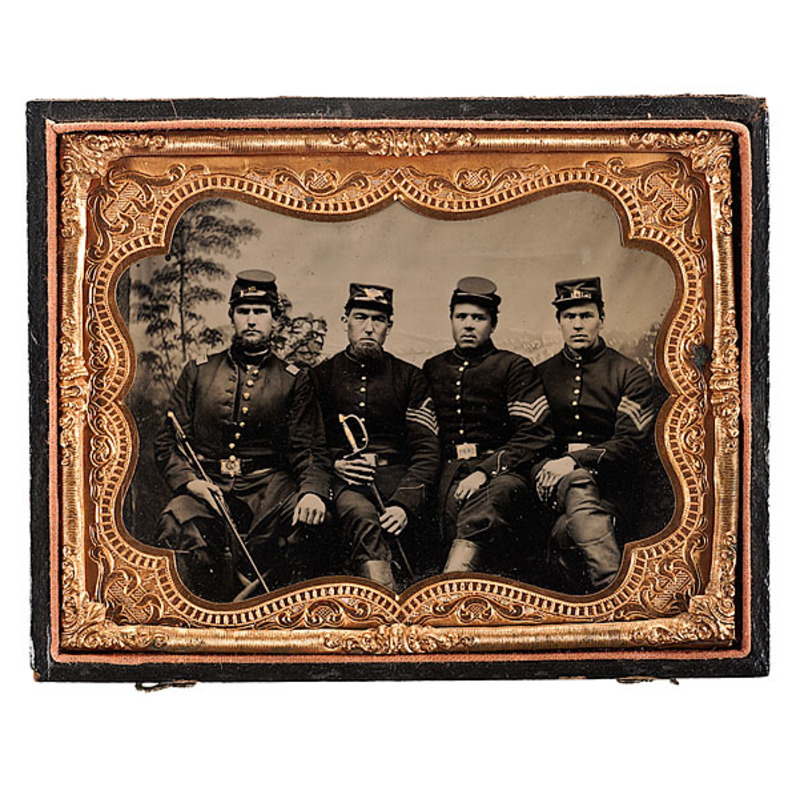 Quarter plate tintype of an unidentified foursome consisting of a Union officer and three company level infantry senior NCOs uniformed in nine-button, single-breasted frock coats. The buttons, belt plates, hat insignia, and hilts are accented by the unknown photographer in gold. Seated in a row, the 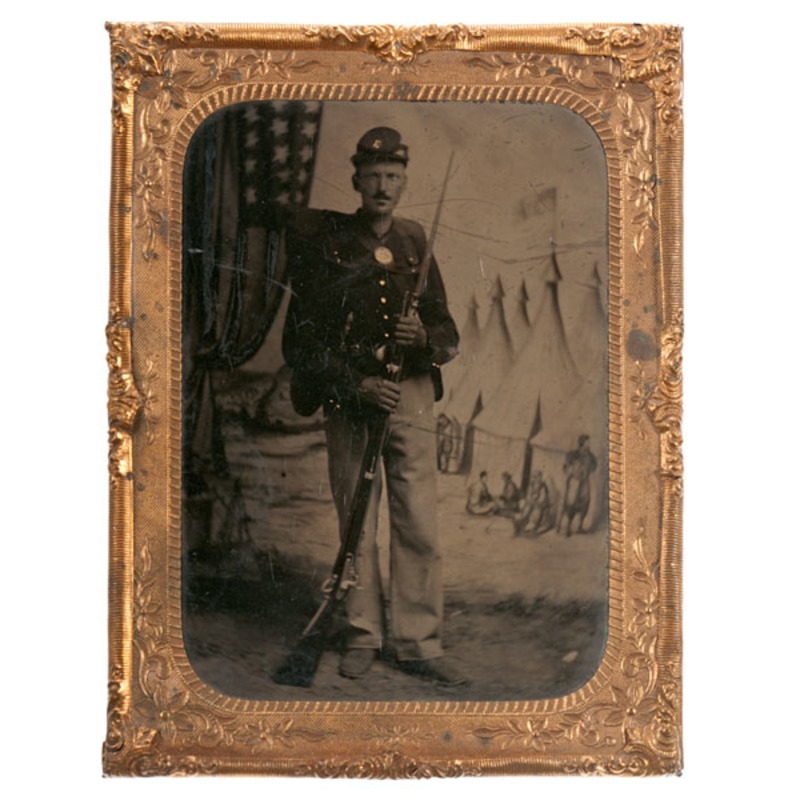 Lot of 3 items relating to Jacob Rapp, 150th New York Volunteers, including a quarter plate tintype and 2pp war-date letter accompanied by the original cover. Tintype is a full-length portrait of Rapp posed in front of a military camp backdrop and armed with a rare two-band musket; housed under a 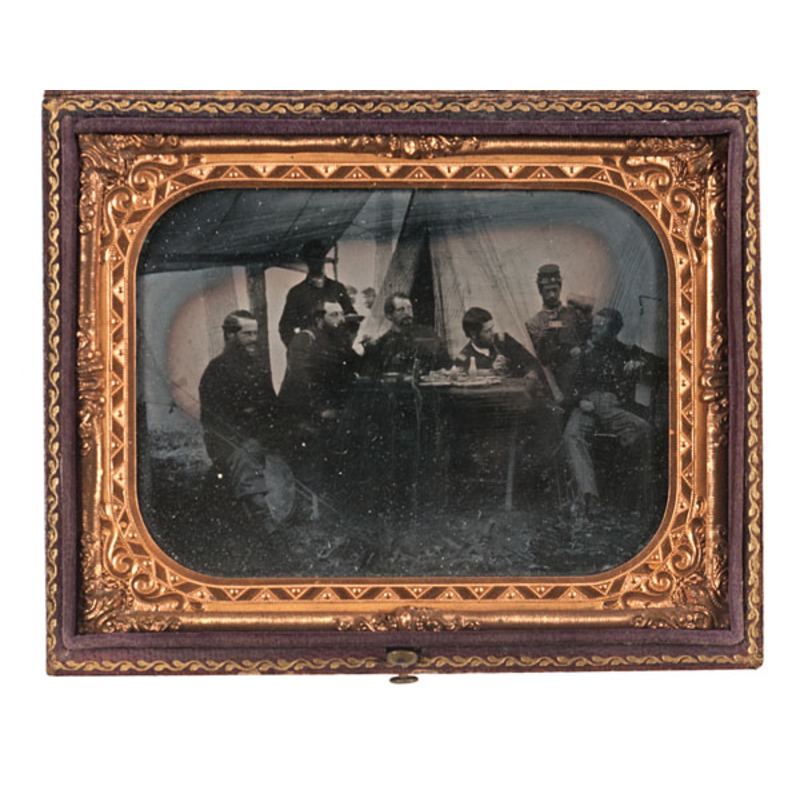 Quarter plate tintype of Union officers seated outside their tent enjoying a meal. At least three of the men wear lieutenant's jackets, and two African Americans standing behind the table may be serving them. One of the African Americans, who wears an Army kepi and and US belt plate, appears to be 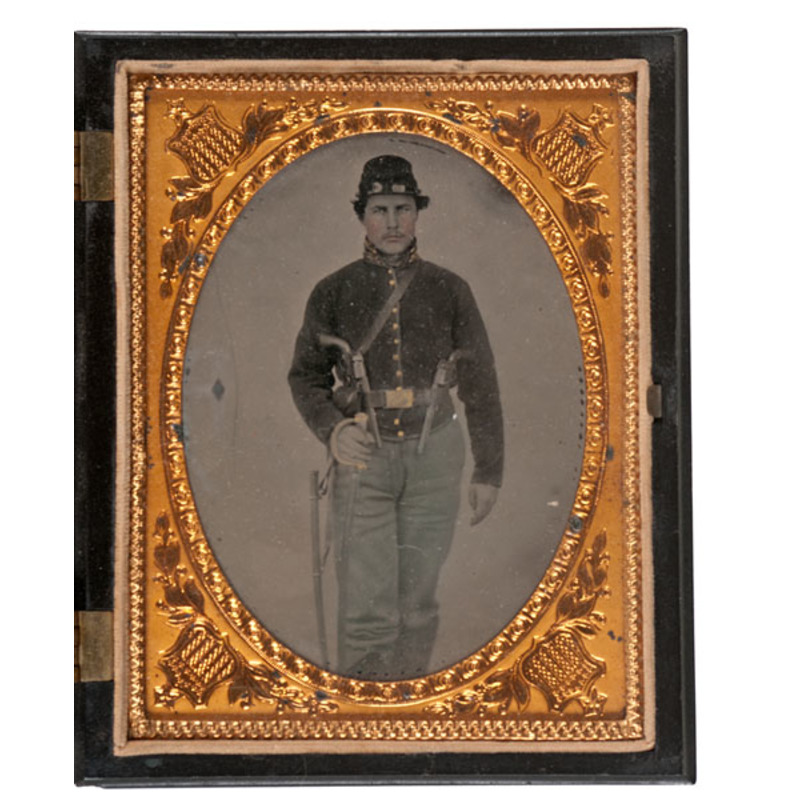 Quarter plate tintype of a cavalry private wearing a regulation shell jacket. The unidentified trooper holds a saber in his right hand and has a pair of 1851 Colt Navy percussion revolvers in his belt. The young, mustached soldier's collar, buttons, belt plate, and sword handle accented in gold, and 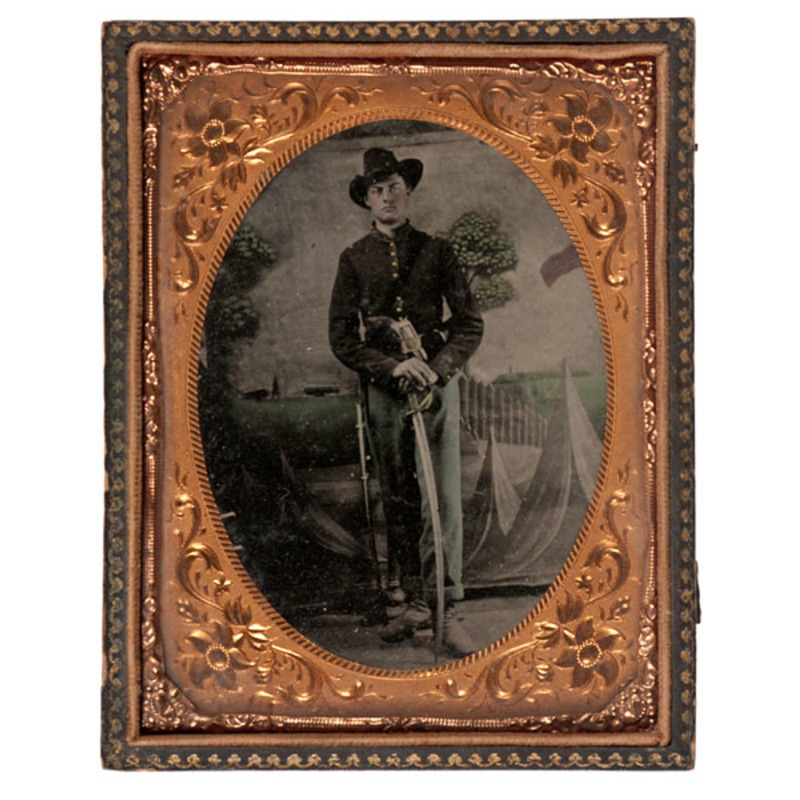 Quarter plate, hand-tinted tintype of a Union soldier standing in front of a military camp backdrop, displaying his cavalry saber and wearing a Remington New Model 1858 percussion revolver in his belt. With two 5 cent revenue stamps affixed to plate's verso, each including inked cancelation date of 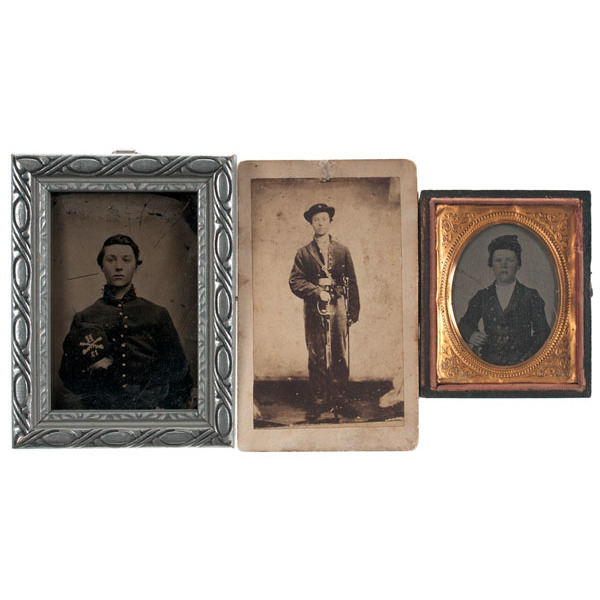 Lot of 3 photographic portraits, including ninth plate and sixth plate tintypes, plus albumen CDV, each identified as James A. Custer, son of Dr. William Webster Custer and second cousin to George Armstrong Custer. Born on November 26, 1847 in Scio, OH, James A. Custer enlisted as a Private in 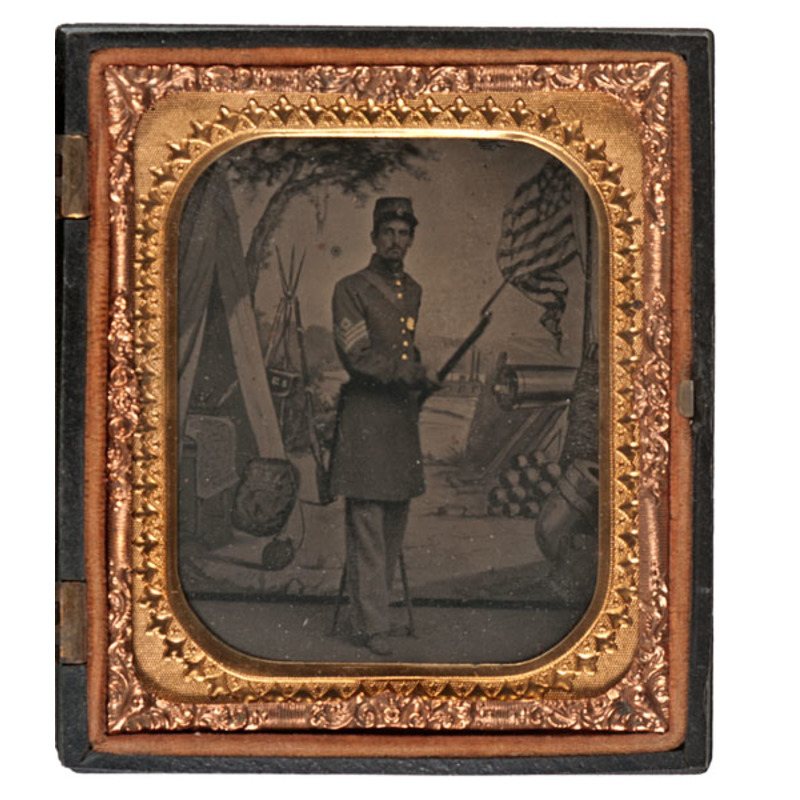 Sixth plate tintype of an unknown 1st Sergeant wearing a uniform with gilt highlights, standing in front of a military camp backdrop and holding his rifled musket with bayonet, as if he is prepared to go into battle. Housed in Beehive, Grain, and Farm Tools Union case. Provenance: From the Estate of 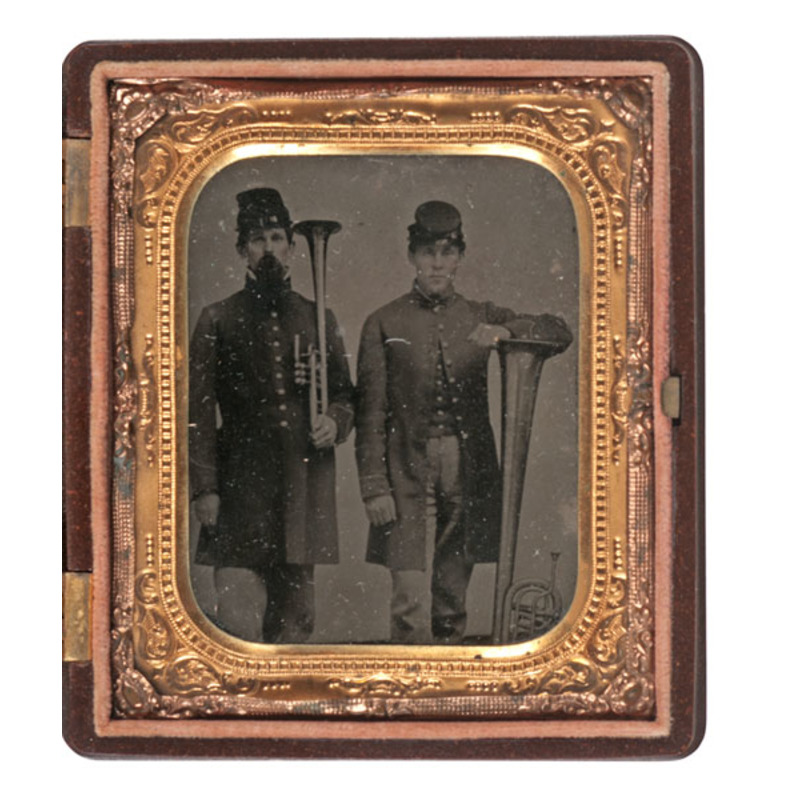 Sixth plate tintype portrait of a pair of Civil War bandsmen. The privates wear standard nine-button frock coats and are part of an unidentified regimental band. Both of the musicians display over-the-shoulder brass horns in different sizes. Housed in Union case with floral decoration. Regimental 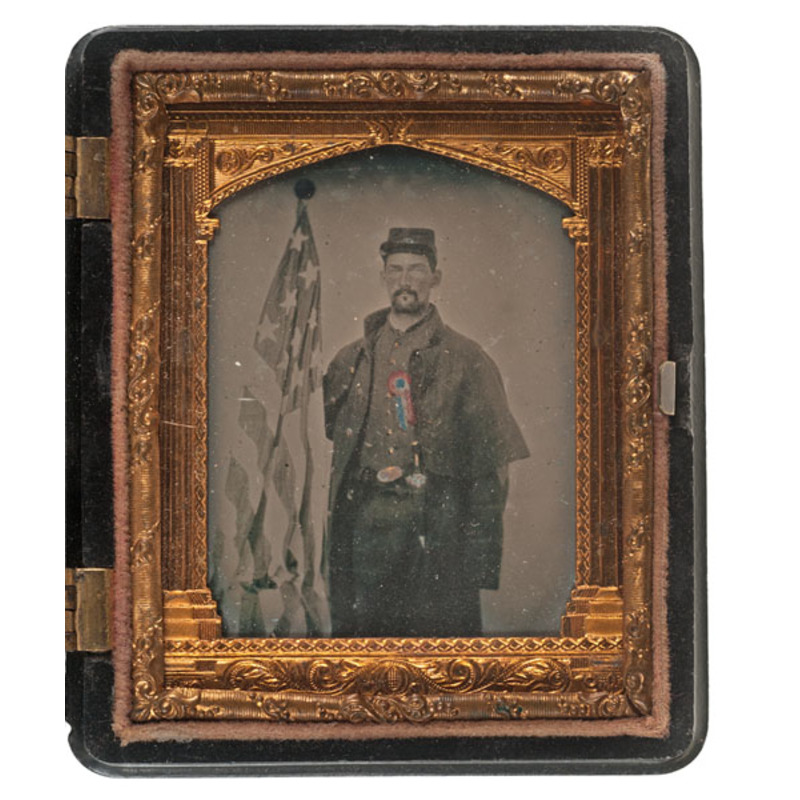 Ninth plate, Civil War-period ambrotype of a soldier posed beside the American flag, wearing a red, white, and blue tinted patriotic cockade on his chest. Housed in a patriotic Union case. Provenance: From the Estate of Kenneth Erwin, Portland, Michigan Condition: Few small scratches on plate 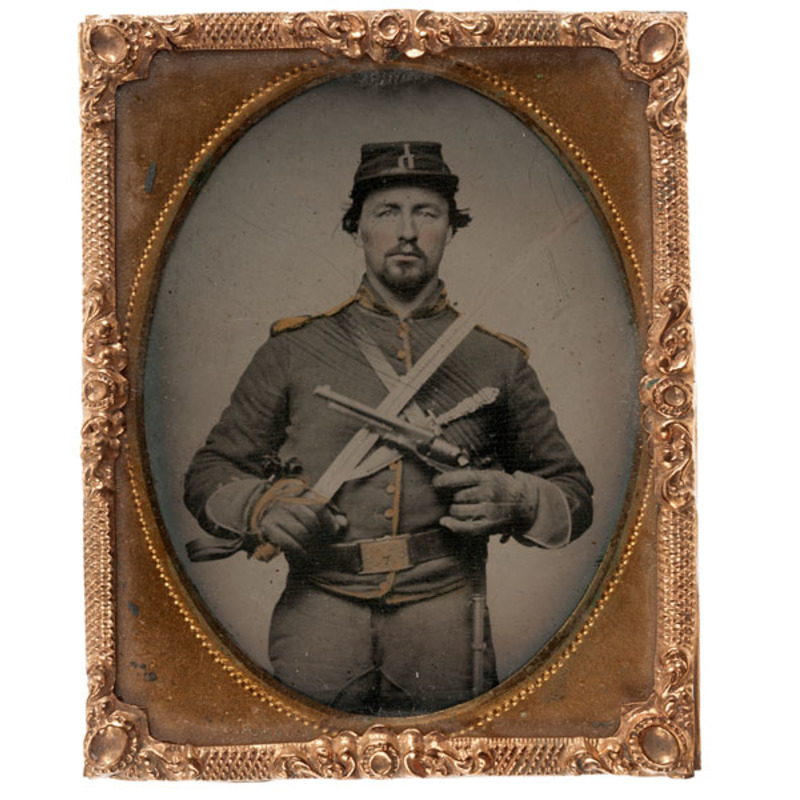 Ninth plate tintype of an unidentified soldier, assertively displaying a Colt 1860 Army percussion revolver in his left hand, and a sword in his right. A cutlery handled bowie knife is tucked under his shoulder strap. The collar detail, epaulettes, buttons, rectangular belt plate, and sword handle 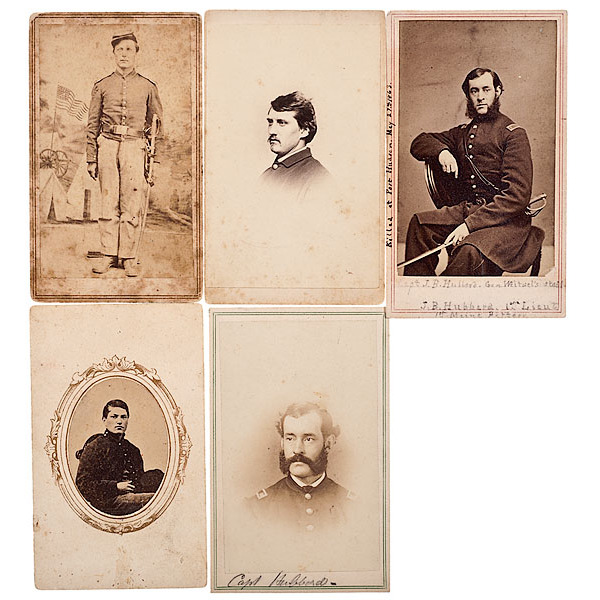 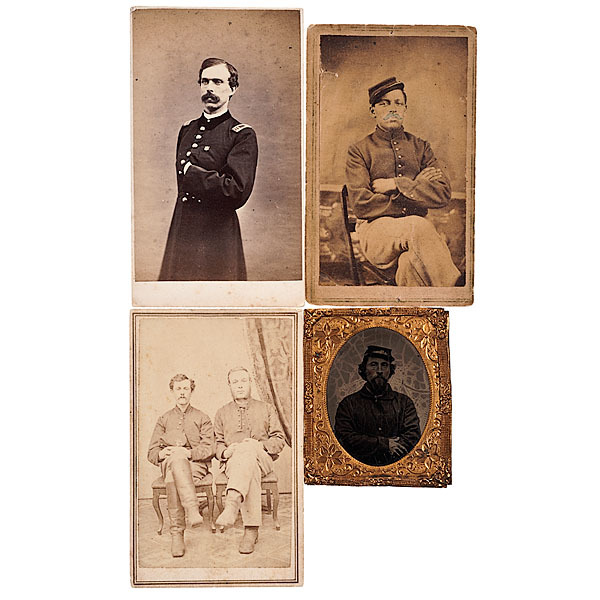 One officer and three enlisted men, one a pair of seated pards. The officer is tentatively identified as Capt. Adelbert B. Twitchell by Wm Pierce, Brunswick, Me. The captain wears a shield-shaped ID badge on his frock coat. Twitchell had prior service in the 5th Maine Battery as Quarter Master 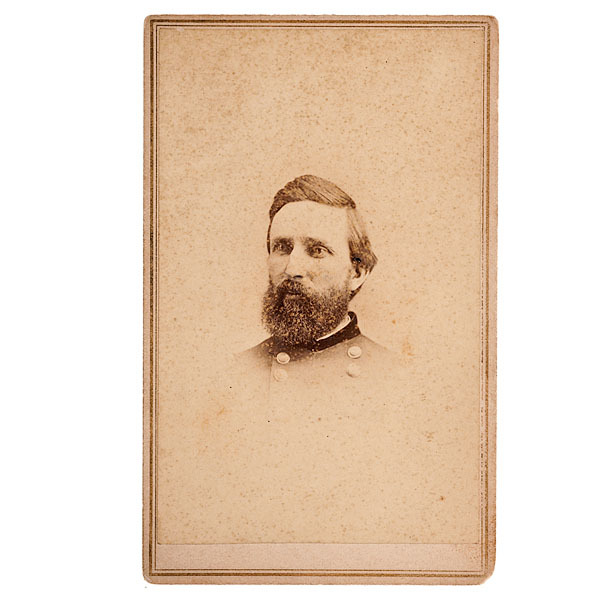 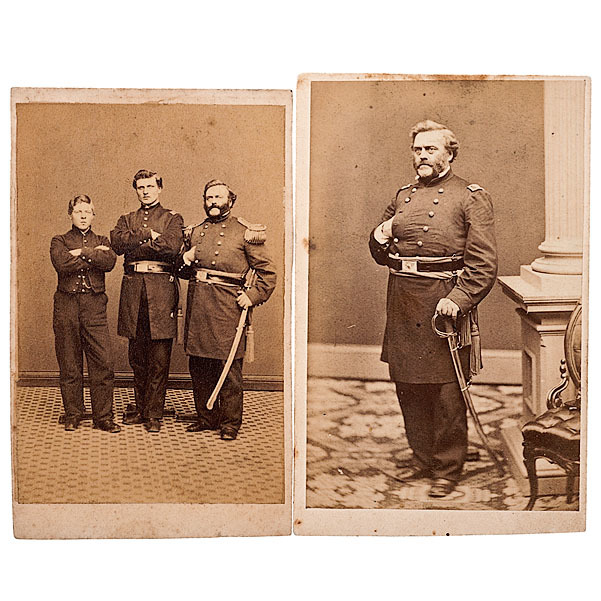 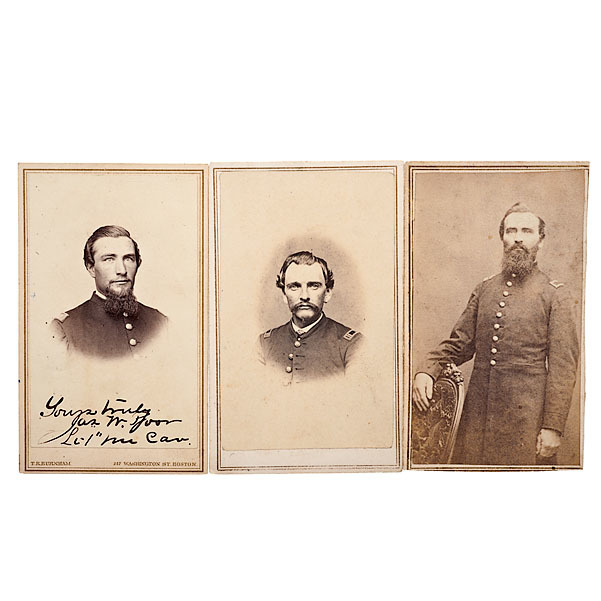 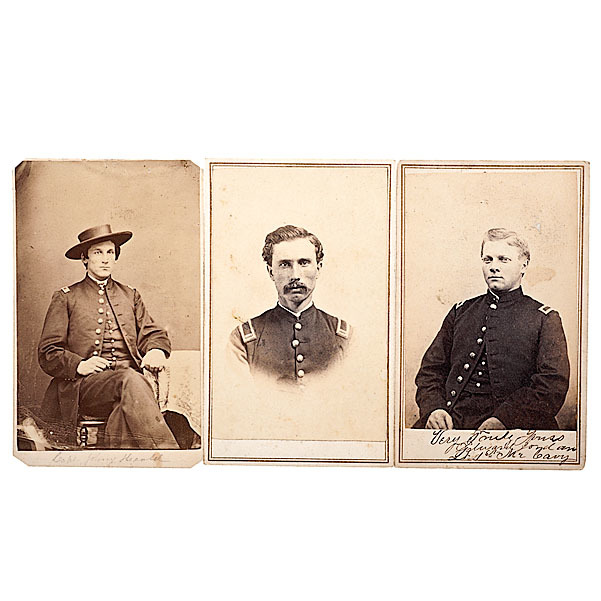